Antrim's footballers miss out on promotion 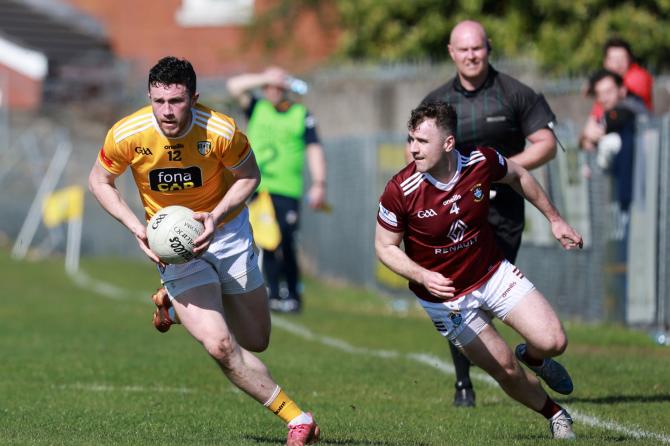 Antrim's Ruairi McCann in action against Westmeath in Sunday's NFL Division 3 defeat to the Midlanders at Corrigan Park. Pic by John McIlwaine

AT ONE stage in their campaign, Antrim sat top of the Allianz Division Three National Football League table with promotion to Division Two a certainty.

But this four point Corrigan Park defeat at the hands of Westmeath meant they end up with nothing.

Looking good throughout the campaign with three wins, and a draw against Laois, they looked to be high flying but that defeat by Louth lowered their colours somewhat, leaving this final game against Westmeath a make or break affair.

Put bluntly, they have only themselves to blame, ending up in the position that they were dependant on others if their ambition of a second straight promotion was to be achieved.

For manager Enda McGinley and the team it must be gut wrenching and it will take serious motivation to lift them for their Ulster championship clash with Cavan, even at Corrigan Park, in a few weeks time.

The Saffrons' hopes of promotion were fading fast - long before a second half collapse saw their five-point lead diminish in the space of two minutes.

In control early on, a black card issued to Tomas McCann briefly halted the hosts in their tracks, but McGinley’s men regrouped and put themselves in the position to keep up their end of the final day conundrum.

Things were still going well for the Saffrons until their five point lead disappeared in the blink of an eye, as John Heslin thumped home a penalty and two points quickly followed.

Westmeath had the momentum thereafter and made the most of it, outscoring Antrim 1-6 to-0-2 in the final 20 minutes to leave Corrigan Park with a win that looked unlikely for the majority of the game.

* Full report in this week's paper.