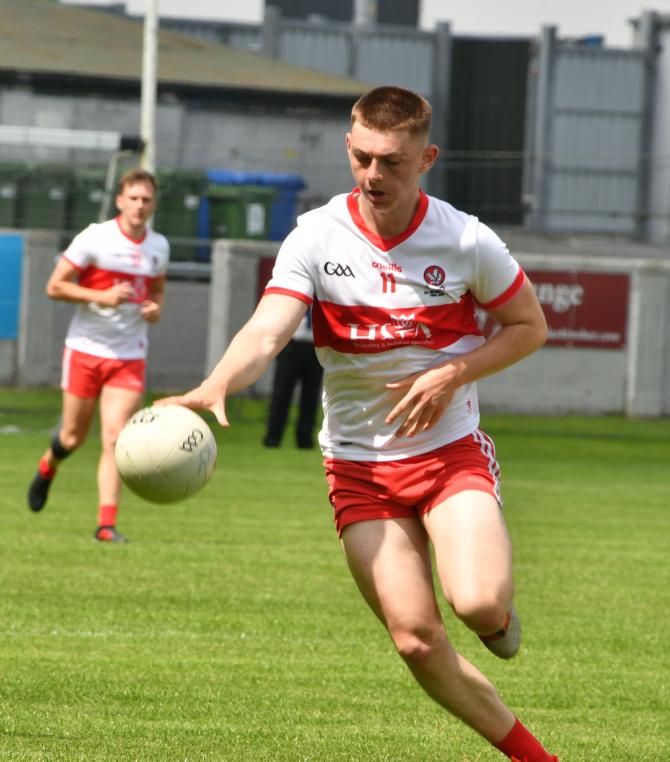 Matthew Downey has impressed since graduating from the minor ranks.

DERRY don’t like to be favourites but they will be against a Down team that will be making their first ever visit to Owenbeg on Saturday evening for the start of the National League.

The problem, if there is one, will be that they will know little about the players they will be facing.

After Paddy Tally wasn’t granted another year by the Down board, a four month search ended with former manager James McCartan getting appointed for a second term. Back in 2010 he guided the Mourne county to the All Ireland final where they lost narrowly to Cork.

After the departure of Tally, a former Derry coach (and now with Kerry), the names of Jim McGuinness, Martin Clarke, Conor Laverty and others were bandied about until ‘wee James’ took over.

In Tally’s last year some key Down players did not make themselves available but McCartan, a highly respected coach in the county, will get them all behind him.

He will not have any Kilcoo players available as they play St. Finbar’s of Cork in the All Ireland club semi final the next day.

They lost both McKenna Cup games with narrow defeats to Donegal and Antrim when they tried out a lot of young players, mainly from their under 20 team that won the Ulster championship last year.

The Down manager has already been spinning out his tales of woe about injured players. He states that key trio Caolan Mooney, Liam Kerr and Corey Quinn are doubtful. In GAA speak, doubtful players usually play! He finishes with: ‘We can have no excuses against Derry!’

With Slaughtneil now out of the hurling championship it is difficult to know if the likes of Shane McGuigan, Chrissy and Karl McKaigue, Brendan Rogers or Paul McNeill will be available.

They did one night per week with the county squad during the hurling campaign.

Conor Glass, who missed the McKenna Cup, will be available after a slight hamstring problem and he is likely to link up with club mate Emmett Bradley at midfield.

The attack looks strong enough but the full back line looks a bit light without the Slaughtneil players.

Conor McCluskey had a fine McKenna Cup campaign at corner back but he pulled up with leg injury against Donegal as did Enda Downey who had started well in the attack.

With Matthew Downey (above) , Lachlan Murray, Paul Cassidy, Niall Loughlin and Ciaran McFaul available for the attack they look solid enough up front.

Nothing is certain when Derry and Down meet but Derry look to be in a better place at the present time.

Interestingly, Saturday's game (throw-in 6pm) will be the first National League game to be shown by BBC Sport NI following a new agreement between the broadcaster and the GAA.

It promises to be an intriguing game, the first game of a new league season always is, with victory important for both sides.

Each will want to get off to a positive start in a highly competitive division where points will be at a premium.

However, home advantage allied to a settled squad and a decent Dr McKenna Cup campaign should see Rory Gallagher's side over the line and make a winning start.