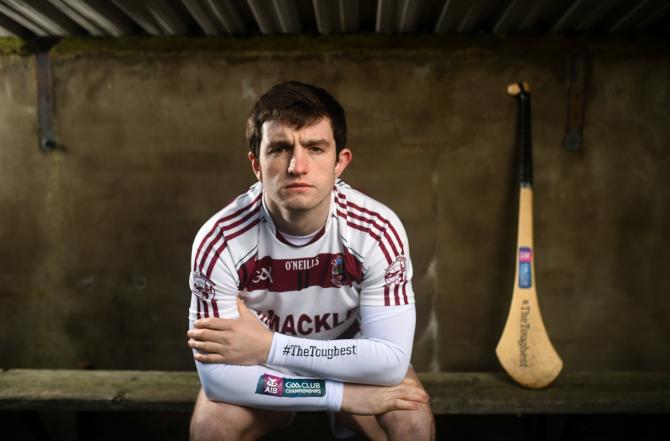 Slaughtneil captain Cormac O'Doherty, ready to lead his side into battle against Munster champions Ballygunner this weekend.

HUNDREDS of faithful Slaughtneil supporters will head for Parnell Park Dublin on Sunday hoping that it will be fourth time lucky for their hurlers. Three times they have been denied a place in the final by eventual winners Cuala, Na Piarsigh and Ballyhale Shamrock’s.
Now another massive hurdle awaits as they take on title favourites Ballygunner, the Waterford and Munster champions.
Slaughtneil’s last outing at this stage was two years ago in Newry when they gave the great Ballyhale Shamrock’s team the fright of their lives before a late Michael Fennelly goal gave the Kilkenny side a 2-23 to 2-18 victory.
Slaughtneil have gained a lot of valuable experience in their journey into big time hurling. Ballycastle native Michael McShane has been their manager for the past seven years. In each of his years they have won the Derry championship and Ulster four times. It probably would have been five but due to Covid the provincial club championships were shelved last season.
While Slaughtneil have been the stand out team in Ulster it is a lot more difficult to come out of Munster where the champions from Cork, Waterford, Clare, Limerick and Waterford will always fancy their chances of going all the way.
Ballygunner have won the last eight Waterford titles and 20 in total from 1966 to date. They are based in Waterford city in the parish of Ballygunner. They were formed in 1954, just a year after Slaughtneil had been founded.
For years, Slaughtneil had been better known as a football club but now they are strong on all fronts and have won the last six Ulster camogie titles. In the last seven years they have won five Derry and three Ulster football titles.
Waterford is essentially a hurling county with 50 clubs, ten more than Derry. Most of them play hurling with 12 in the senior grade. Contrast that with Derry who have just eight clubs playing hurling.
Remarkably, two of the main Ulster club hurling titles came to the Oak Leaf county with Banagher taking the intermediate. Na Magha might well have won the junior but for a mix up between the referee and the scoreboard!
The Ulster champions have a superb defence and rarely concede goals. That defence is boosted by Gerald Bradley dropping back as sweeper. They may not score as much as they would like with captain Cormac O’Doherty and Brendan Rogers the main contributors. The fact that they are football free means that for the past two months they have been able to concentrate solely on hurling.
Antrim champions Dunloy were strongly tipped to relieve the Emmett’s of their title but for the third time in four years they were unable to match the tenacity and skill of the Derry side. Their highly rated forward line was snuffed out by the superb defending of players like Gerald Bradley, Sean Cassidy, Meehaul McGrath and excellent keeper Oisin O’Doherty.
However, in this game, Slaughtneil will face a forward line equal to that of Ballyhale Shamrock’s two years ago.
The Waterford side were drawn in the preliminary round and had a comfortable 3-20 to 2-6 victory over Ballyea of Clare who were badly hit by injuries.
In the semi-final they had a hint of fortune in getting past Tipperary champions Loughmore-Castleiney who were also the Tipp county football champions. The bulk of the Loughmore-Castleiney team were playing 12 weeks in succession.
They faced Kilmallock of Limerick in the Munster final. Kilmallock had beaten Middleton of Cork in the semi final. Kilmallock, with a number of prominent county players on board, fell flat on the day as Ballygunner sauntered to a 3-20 to 1-12 victory to follow up the provincial titles they won in 2001 and 2018.
Karl McKaigue is likely to be the player detailed to mark Ballygunner’s high scoring Dessie Hutchinson who just turned 26 earlier this month. McKaigue did well against Ballyhale’s scoring machine TJ Reid in the last semi final. McKaigue goes about his business quietly and rarely gives away frees. Hutchinson who scored 1-5 from play in the Munster final actually turned down a professional soccer career for his love of hurling. He captained the Ireland under 19 team and had a spell with Brighton and two with Waterford United in the League of Ireland.
He is not the only accurate forward in this well balanced team. Pauric Mahoney and Billy O’Keefe both hit big scores in that one sided Munster final.
In defence, Philip O’Mahoney is a real powerhouse and behind him Stephen O’Keefe is a brilliant goalie.
Ballygunner have a big advantage in that they have been playing against stronger opposition throughout the campaign than Slaughtneil have.
The Ulster champions will not be found wanting and will not lack in confidence.
When asked about their chances manager McShane was quick to retort: “We believe we can beat any team in the country.”

We'll find out on Sunday...