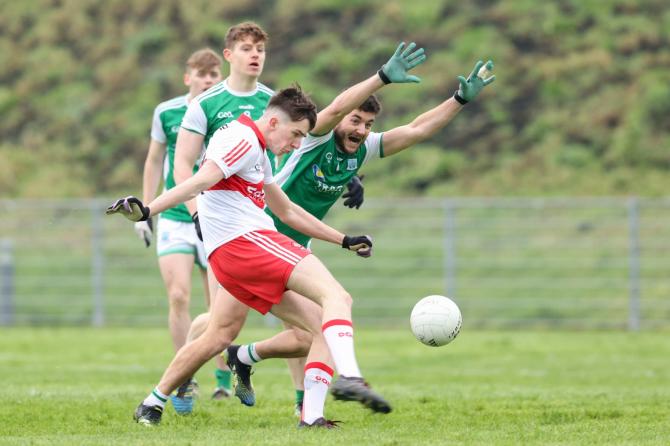 Ryan Lyons tries to block the shot from Paul Cassidy during Derry's defeat of Fermanagh in the Dr McKenna Cup.

DERRY may have exited the Dr McKenna Cup at the semi-finals stage in midweek but players and management may not be unduly worried about the 2-09 to 0-11 defeat to Donegal.

Rory Gallagher and his charges know there are bigger fish to fry in the coming weeks and months - not least the National League Division Two opener at home to Down at the end of the month.

Indeed, an unfamiliar Derry side emerged with great credit against their vastly experienced opponents who ability to score goals proved the difference on the night.

Gallagher opted to rotate his squad for the trip to Ballybofey and there was more than enough positives to suggest Derry are in a good position ahead of the Division Two opener against the Mourne men in little over a week's time.

Paul Cassidy, Lachlan Murray, Conor McCluskey and Enda Downey all impressed but injuries for Downey and McCluskey left a sour note on an evening when it was more about performance than result given the gulf in experience between the two sides.

Gallagher handed a senior debut to Glen keeper Conlan Bradley while both Enda Downey and Anton Tohill were making first starts after earlier substitute appearances. It was a team selection influenced by the quick turnaround from Saturday's victory over Fermanagh on a heavy pitch.

Tohill, despite being named at midfield, started in the full forward position and while Derry enjoyed plenty of first half possession and produced some encouraging passages of play, their good work was undone by two the poor goals conceded.

The first arrived seconds before the first half water break with Derry having recovered from points down to lead 0-4 to 0-2, although Donegal's shooting was on its way to racking up seven first half wides. The Donegal was fortunate to stand given that a Drry player appeared to be fould in the build up.

Early scores from Jeaic McKelvey and Jamie Brennan had been cancelled out by two efforts from Downey, one lovely effort from Toner and Paul Cassidy's first of an impressive first half for Bellaghy man who has been showing good form so far this year.

It hadn't been all good news to the point though as Downey, Derry's most impressive player to that point, was forced off by injury to be replaced by Emmet Bradley after only 15 minutes.

Two points up though, Derry will be kicking themselves for an easily avoidable first goal. Jamie Brennan shot was at the posts but hung short and was broken down in front of the posts. Michael McEvoy initially did superbly to gather the break but before he could get his pass away he was robbed by McKelvey in front of the posts giving Caolan McGonigle an easy finish for 1-02 to 0-4.

Oisin McWilliams immediately hit back with a wonderful score from the left to tie the game once more but after Tony McClenaghan and Cassidy, another excellent effort, had swapped scores a second Donegal goal arrived and again it had more than a touch of fortune to it.

Once more Brennan was at the heart of the move, releasing the marauding Odhran McFadden-Ferry to cut in from the left. With most assuming he would take his point, McFadden Ferry drilled a low shot which unfortunately for Bradley went through a sea of legs, catching him unawares and suddenly it was 2-3 to 0-6.

Further scores Michael Langan (free) and Shane O'Donnell gave the home side a five point half-time lead which left Derry with plenty to do in the second half.

Derry rang the changes at the interval, introducing Jack Doherty, Shane Heavron and Declan Cassidy but they rarely looked like eating into Donegal's lead in a third quester which was something of a none event. There was further bad news on the injury front for both counties with Derry losing McCluskey who had been superb while Donegal's Tony McClenghan also hobbled off the heavy Ballybofey pitch.

Murray scored for the third game in succession with a nice point but it was Derry's solitary score of the third quarter as the second half water break arrived with Donegal 2-08 to 0-7 up.

Donegal were able to introduce Michael Murphy off the bench but it was Murray who looked Derry most dangerous player in the closing stages, scoring one lovely point from play and following it up by winning and converting a difficult mark for 2-09 to 0-10 as we entered the final five minutes.

Anton Tohill's first senior point for his county was the only event of note in the closing stages and while Derry have exited the McKenna stage left, it has left them, injuries aside, in a positive position ahead of the league. Matthew Downey and Lachlan Murray have put themselves right in the frame and with other pushing, the competition for places looks to have take another step up.

Given that Donegal had ten of their first team on duty the new look Derry team gave as good as they got for long periods. Conor McCluskey had a brilliant game until his injury holding Paddy McBrearty scoreless until that injury. McBrearty had scored a total of twelve points in the two previous games against Down and Antrim. Donegal will meet Monaghan in the final after Monaghan beat Armagh 5-4 in the first ever McKenna Cup shoot out.