'We're proud to be Ulster champions' 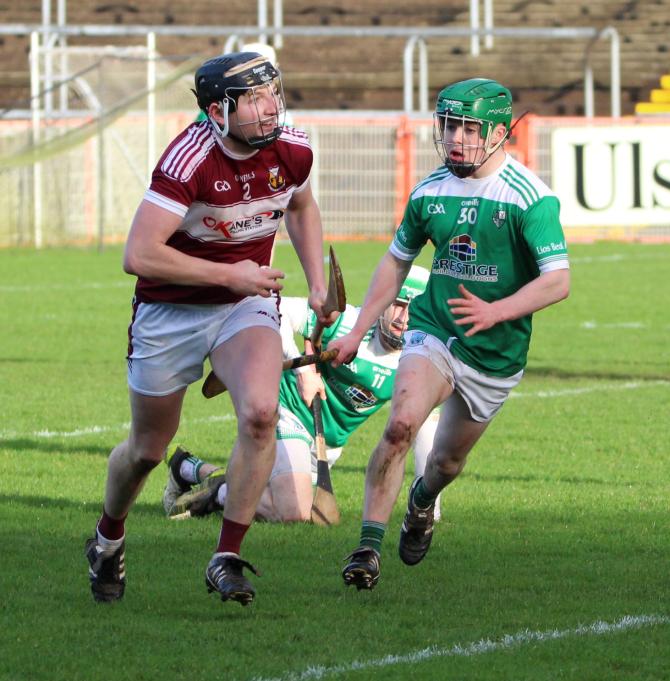 Banagher became the first Derry club to win the Ulster Intermediate Club title at the weekend.

BANAGHER hurling manager Ryan Lynch admits he and his players are looking forward to testing themselves in the All Ireland series after becoming the first Derry club to win the Intermediate Hurling Club Championship in Omagh at the weekend.

The St. Mary's men had just too much in the end for their opponents - Fermanagh champions Lisbellaw - and will now play Munster champions, Kilmoyley from Kerry, in the All Ireland semi-final. The men from The Kingdom defeated Cork side Courcey Rovers 0-24 to 0-21 in something of a shock.

Speaking after the win over Lisbellaw, Lynch admitted that his players hadn't got everything their own way against determined opponents.

"After the first half, the first 10 or 15 minutes, we were very worried. We just weren't controlling the ball, we weren't taking the right option so at half-time we were delighted to be going in level," he confessed.

"At half-time we sat the boys down and told them to relax a bit. We gave a few reminders that we hadn't put the full effort in during the first half. It didn't feel like an Ulster final, we just weren't up to the pace of the game.

"Second half we started to ping passes, started to take scores. We began look  clean and tidy in our play and the drive was is in this team.

"All I can say is, all the players and their families, their wives, girlfriends, my own wife and the all the parents here, we are a very tight knit community. I know a lot of people say that but Feeny, Park, the Banagher area, we've had a few lads from around the Foreglen and Drum areas playing for us over the years, being that tight knit is what got us over the line in every championship game we played this year.

"Every opposition has been finding it tough to score against us, just another 12 points today, and that's superb for a hurling team. But that only comes, people say about the back six being very strong, but the front six is doing the work and the back six is tidying up along with the midfield.

"We are going to enjoy the hell out of the next few days, that's all I can say. We are proud to be Ulster champions for the first time. Lisbellaw was exactly what I expected, very tough opposition and very fast and mobile up front. They asked a lot of difficult questions of us and we said before we got off the bus - 'If we are beat today, we will be beaten by the better team but if we work as hard as we can they we will give ourselves a great chance,'" he added

"I was chatting to Davy there and understandably he's a very disappointed manager for Lisbellaw but listen, they will come again and we would be honoured to share the pitch with them in another championship game if that happens down the line for us.

"Look, it is very special when you  have someone like Ciaran O'Connell coming in from the outside in and right away, gets the players' attentions, drives them very tough, very hard with the respect the players have for him because of that, we just want  to improve our team, improve our club and we want to win silverware.

"We've now got two cups, we now get to play in the All Ireland Club series for the first time in the club's history. It could be the last time, who knows, but we'll not be found wanting in the effort stakes and I'm the proudest man in Banagher.

"We just looked at it like every day out gave us an opportunity. Darragh Roe (McCloskey) is the first captain to win an Ulster Club title in our club and you can never take that away from him. This can never be taken away from these guys. I still remember Gregory Biggs lifting the cup back in 2005 for the senior championship. He was the first man of our generation to do that for this club and he will always be the first, you just have to break that glass ceiling.

"These guys like to thump the life out of that glass ceiling and I am proud of that fact. They'll not be found wanting in the next game. Whether that means we win or we lose, as long as we've played with pride, we'll  throw the kitchen sink at it and find out where we are it.

"We'll be proud walking off the pitch no matter what like we have been in every championship game over the past two or three months."