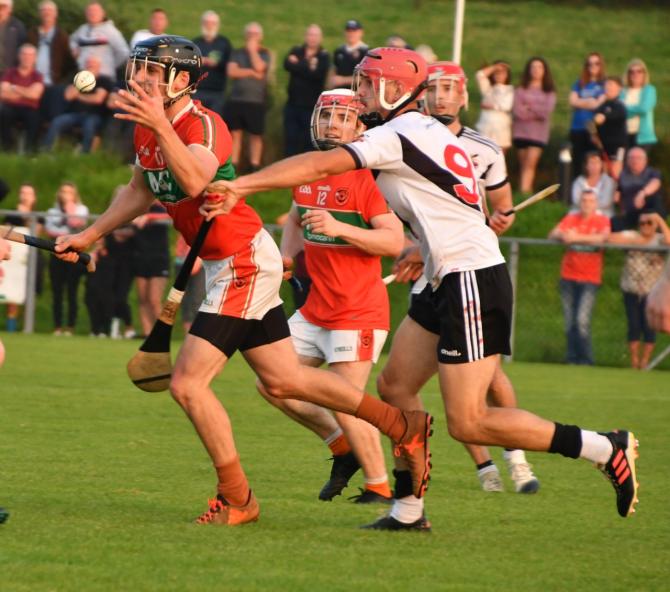 Slaughtneil are very hot favourites to make it nine titles in a row when they meet Kevin Lynch’s on Sunday.

WITH THE football teams having a break the hurlers will take pride of place this weekend.

There will be two intermediate semi finals at Owenbeg on Saturday with the senior final at the same venue on Sunday.

The Junior final which was to have been played before the Senior final on Sunday has been cancelled after it emerged that Eoghan Rua Coleraine conceded the match to opponents Na Magha.

An improving Lavey team will be strong favourites to progress to the final. In the earlier rounds they were unlucky to lose to Kevin Lynch’s who will be contesting the senior final next day.
They will be hoping to have Fintan Bradley back. He is their top forward but he has been out with injury for the past month.
They may have lost heavily to Slaughtneil but that generally happens to the other hurling teams in Derry. Ciaran Hendry and Oran Downey can control midfield and, in a solid defence, Brendan Laverty and Eamon McGill are reliable.
Their full forward line of Liam Murphy, Ryan Farren and Ryan Mulholland are lively and will give the none too solid Ballinascreen backs a hard hour.
In their last game Ballinascreen were pushed all the way by Na Magha and it took the accuracy of Ryan Scullion and Paul Cleary from frees to finish strong for a 0-24 to 0-15 victory.
Ruairi McWilliams, John McCloskey, Charlie Gilmore and Aaron Kelly will lead the ‘Screen challenge but Lavey look the better balanced team.

This has the makings of a really tight contest between two solid looking teams.
Swatragh have been the big improvers in Derry hurling this season with the introduction of some fresh blood.
Sean Martin Quinn, who is also a talented footballer, has been scoring freely from both frees and play.
In their last outing they were much too good for Eoghan Rua, winning by 17 points.
Banagher, even without leading player Brian Og McGilligan, ran Kevin Lynch’s to just four points in an evenly contested game.
They are loaded with experience and will go into this game as slight favourites. They will have a physical advantage and their direct play is difficult to counteract.
Tiernan McCloskey and Liam Eoin Campbell are the leading players in attack. They have a good midfield in Oisin McCloskey and Callum O’Kane.
There might be a recall for fit again keeper Darly McDermott. It could go either way but on the basis of their display against Kevin Lynch’s it could be Banagher for the final.

Slaughtneil are very hot favourites to make it nine titles in a row when they meet Kevin Lynch’s on Sunday.
The Emmett’s have won the title 14 times with eight coming since 2013. They are such a dominant force that it is hard to see who will stop their run.
Kevin Lynch’s have won 23 titles with the last being ten years ago. A lot of their success was due to the exceptional ability of the now retired Geoffrey McGonigle.
His son Niall is now at the other end of the business. He is the goalkeeper and an excellent one at that!
The champions have also won the Ulster title in 20l6, 2017 and 2019. They played the famous Kilkenny team Ballyhale Shamrocks in the 2019 All Ireland semi final and ran them close.
The current Lynch’s team is very young. They may also be missing the injured Tiernan McHugh and they will need every player if they are to make a close contest of it.
Slaughtneil have all the talents needed to have a good hurling team, skill, size and fifteen very athletic players.
They have a very strong panel of players and look to good for the Lynch’s who did give them a fright in the 2018 semi final at Ballinascreen.
While Richie Mullan, John Mullan, the three Kelly brothers and Darragh McGilligan will have their day they just do not have the firepower up front to match the likes of Brendan Rogers, Se McGuigan and Derry captain Cormac O’Doherty.
It should be nine in a row for the most dominant club team the county has ever seen.