Creggan get there eventually 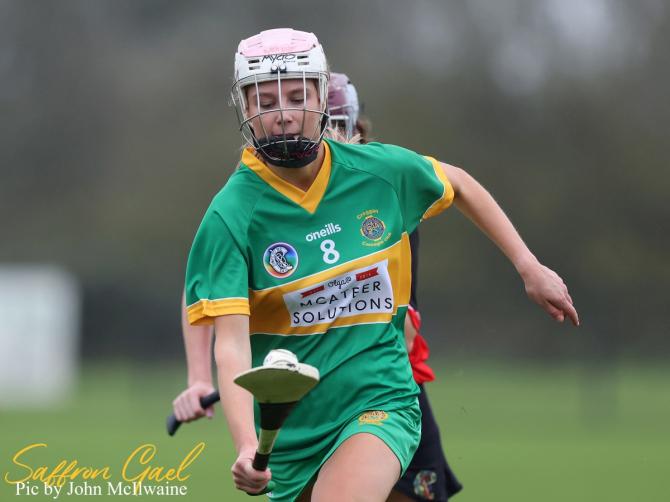 Good win for Creggan over Ahoghill at the weekend.

A GOAL from Maria Gately and two point from Player of the Match Eavanne Martin sealed Creggan’s place in the semi-final of the Antrim Intermediate Camogie Championship by virtue of a four point win over Ahoghill at Creggan on Sunday evening.

The sides could not be separated after ending all square at the end of full-time and extra-time last week in Ahoghill and it was the same again this time around in another absorbing contest.

Creggan led by 0-5 to 0-3 at the first water break, four of the scores coming from minor county star Martin, while Rubymarie Rice got the other one.

County senior team goalkeeper Caitriona Graham was starring at midfield for Ahoghill and she started a run of score which got the St Mary’s girls back in front, and when Noreen Graham got her team’s first goal they were five clear.

However, Creggan came down the other end and Rubymarie Rice fired one to the net to give her team new hope and they trailed by just two points 1-8 to 1-6 at half time.

Three in a row from Evanne Martin early in the second half saw Creggan take the lead and it was score for score for a while as two well matched teams gave their all.

A Noreen Graham shot for a point dipped into the Creggan net midway through the second half, and gave the visitors the upper hand, but a second goal from Rubymarie Rice got Creggan back on terms and it remained that way unto full time with the scores level on  2-12 apiece.

Ten minutes each way were played to try and find a winner, but just as last week there was no separating the sides.

Creggan had gained an edge when two points from Evanne Martin and one from from Ciara McCollum gave them a three point advantage at the end of the first ten minute session, but Ahoghill hit back with points from McCloskey and Caitriona Graham (2) to level the scores.

Another Rubymarie Rice goal appeared to have finally sealed it for Creggan but Ahoghill came again and a brilliant goal from Maura Downey late in injury time tied things up yet again.

Two more periods of extra time were signalled by match referee as darkness descended and it looked like we were in for a ‘45’ shoot-out, until a late scoring burst saw Creggan seal it with a Marie Gately goal and two more points from county minor star Martin sent the girls from the Loughshore through to a semi-final meeting with Loughgiel Seconds next weekend.