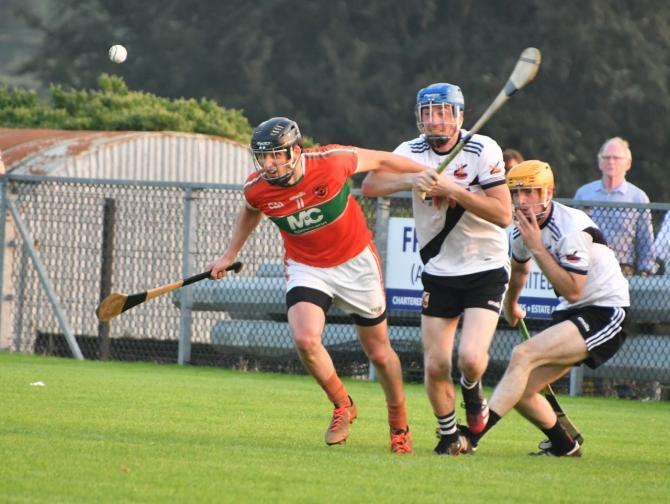 Lavey and Kevin Lynch's will both be in action this weekend.

The Derry senior hurling championship semi-finals will take place over the weekend with holders and hot favourites Slaughtneil taking on an improving Lavey side.

In the other game, Kevin Lynch’s met Banagher in what is usually a feisty local derby.

Lavey, under the driving force of manager Johnny McGarvey, have been an improving force but they still look to be a bit short of beating a team like Slaughtneil who show no sign of flagging despite many of their team being footballers as well. They seem able to stay at the top in both codes but that is down to good management and player dedication.

Michael McShane is in his seventh season as the Emmett’s manager and has also managed the Tyrone hurlers this year. Most of his Slaughtneil hurlers were not idle either during the county season. Most of them were playing with the Derry hurlers or footballers.

There is a great tradition of hurling in Lavey going back to the 1930’s. They were the dominant team in the forties and fifties and their great rivalry with Kevin Lynch’s heightened interest in the county during the eighties and nineties. They have not won a title since 2010 but have had success at under age levels and are moving back towards the top again.

It is a tough ask to expect them to get the better of a Slaughtneil team that is so clinical up front where Derry captain Cormac O’Doherty and Brendan Rogers are supreme marksmen.

Lavey, too, have a deadly finisher in Fintan Bradley who missed their last game against Swatragh which ended in a draw. Prior to that they had beaten Na Magha comfortably and were unlucky to lose to Kevin Lynch’s by a point. Their left half back Ciaran Hendry is a brilliant long range free taking expert and in the front line Ryan Mulholland and Ryan Toner can take their chances.

Apart from their all round skills, most of the Slaughtneil players are physically strong. Oisin O’Doherty is an outstanding goalie and in front of him Sean Cassidy, Sean O’Caiside, Karl McKaigue and Meehaul McGarth will not concede any easy scores. Lavey are brave but it is unlikely to be enough to overturn the best hurling team in Ulster.

Last year the Lynch’s reached the final and looked good early on before Slaughtneil clicked into gear and it ended as a very one-sided contest.

This meeting with fierce rivals Banagher will see a full blooded contest as the vastly experienced Feeny men take on the younger Dungiven side. There is never much between them when they meet and while Kevin Lynch’s will be favourites they are not guaranteed victory. Kevin Lynch’s may have the better looking attack where Odhran McKeever and Conor Kelly are expert finishers. Then there is John and Richie Mullan who play in the half back line and can score from long distances,. In fact, Richie has scored a total of 0-14 from defence and John has hit half a dozen points.

Banagher do not possess an overdose of pace but they counteract that with a direct style of play. They have not been high scorers in any of their games. They beat Eoghan Rua and Ballinascreen but only had half a game against Slaughtneil due to a floodlight failure. At that stage they were trailing by 1-10 to 0-6. There was no re-fixture as Banagher conceded due to the bulk of their players also being in the football team as well.

Due to their wealth of experience Banagher can keep in touch but the greater youth and pace of the Lynch’s is likely to take them to the final.

While the losers of the semi-finals will hang up their hurls until next season, the other four teams - Swatragh, Na Magha, Eoghan Rua and Ballinascreen - will play off for the Intermediate and Junior titles.

Swatragh will be very strong favourites to get past an Eoghan Rua team that struggled in the senior championship. Swatragh, on the other hand, drew with Lavey and gave Kevin Lynch’s a good test. In fact, Swatragh’s Sean Martin Quinn is the leading scorer to date with 1-22.

Sean Leo McGoldrick has got most of the scores for the Coleraine men and has accounted for 0-19 of their total. If they are to cause an upset McGoldrick will need a lot more support.

Swatragh have been big improvers this year and it looks to be another difficult assignment for the veteran laden Eoghan Rua side.

Ballinascreen, despite an indifferent season, should win this game with a bit to spare. Na Magha have been hit by injuries and have suffered heavy defeats at the hands of Swatragh, Lavey and Kevin Lynch’s.

Ballinascreen have had good teenage teams but very few of them make it through to senior level. They are reasonable in defence but rely heavily on Paul Cleary, Ryan Scullion and Noel Rafferty for scores.

Na Magha have a fleet footed and rising star in Padraig Nelis who has already made ii into to the Derry senior team.  Deaglan Foley another Derry senior player and can make an impression but it looks to be the case of the city lads failing to overcome their country cousins once again.