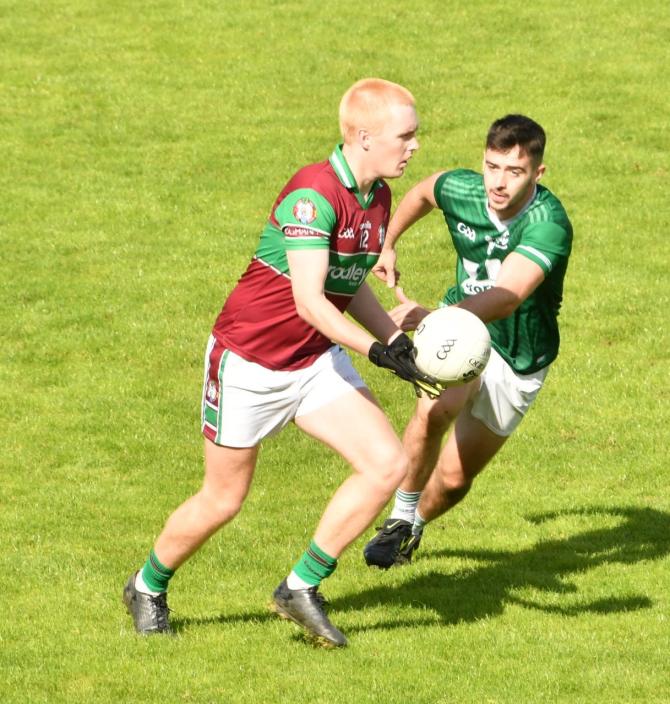 Eoghan Rua lost to Newbridge in the Derry SFC at the weekend.

A STOPPAGE time point from substitute Peter McGrogan edged Newbridge to a one-point victory in perfect conditions at Owenbeg as the Derry SFC continued at the weekend.

On top of their round one win over Ballinderry, it leaves them guaranteed to finish as group winners regardless of this week's game against Banagher ahead of the draw for the last 16.

Newbridge were twice in a commanding position in Sunday afternoon's encounter, only for Coleraine goals to parachute them back into the game, including Colm McGoldrick's 59th minute equaliser.

From the moment Paudi McGrogan thundered ahead of Colm McGoldrick to win possession in the first attack of the game, Killian Conlan's side played with purpose.

Conor Doherty and Aidan McGlone were full of running in the engine room. Odhran McGlone was stationed at centre forward to do a 'marking job' on Sean Leo McGoldrick, but it was the Newbridge man who came out on top with four points from play and he pulled a brilliant save from Cillian Butler.

Ruairi Mooney was given a tough opening half with the movement of Conor McAteer and when the Newbridge man's point chance dropped down off the post in the second minute, Odhran McGlone fired over the bar to make the first statement of intent.

A Dara Mooney free levelled matters, but it was Newbridge who were playing all the football. Their only problems came when they fell asleep on a couple of occasions when closing down Cillian Butler's kick-outs, a feature of their win over Banagher. One nearly resulted in a goal, but Ciaran Mullan was closed down.

Mark McGrogan and Jude Diamond combined to set up a point for attacking wing back Shane McGrogan, which was followed by a McAteer effort on the run and Newbridge were 0-3 to 0-1 ahead after nine minutes.

McAteer and Odhran McGlone thumped over two excellent points and the 'Bridge were in control at the end of the first quarter.

A moment of slackness from a sideline ball saw Ciaran Mullan intercept a pass and when Colm McGoldrick was fouled, Dara Mooney tapped over another free.

Mooney then set up a chance for his brother Ruairi to slot over and Coleraine, who continued to plod away, were back in the game.

Eoghan Rua hit back with their first goal. Liam McGoldrick and Aidan McGonigle were both involved, but it wasn't until Ciaran McGoldrick flicked the ball down on the turn that the door opened for Eoghan Rua and McGoldrick smashed home his second goal in as many games to open a 1-5 to 0-4 lead.

With the sides level (1-4 to 0-7) at half-time, the game was perfectly poised. It was the 'Bridge who answered the first question of the second-half with Doherty's third point of the game after he won a Coleraine kick-out and dashed forward.

Paudi McGrogan added a point after referee Gregory McWilliams overruled both his umpires. Odhran McGlone kicked another score, equally as good as his others, and Newbridge were 0-10 to 1-5 ahead, with Conor Doherty added to their cause with a fine point from distance.

Liam McGoldrick kicked two points in a five-minute spell early in the third quarter, making the score 0-11 to 1-7.

Conor McAteer broke loose again with two points, the second coming from a mark at the end of a Conor Doherty pass, and Newbridge were cruising to the finish line. Or so it seemed. Coleraine don't do panic and never stop battling in the face of adversity.

With a minute to go, and with a sense of urgency, Aidan McGonigle fed Niall Holly who drew Newbridge's defence towards him. Then out of the corner of his eye, he played a pass across goal towards Colm McGoldrick who palmed to the net.

The game had draw written all over it, but Newbridge kept to their plan and attacked for the win their performance deserved and Peter McGrogan was the coolest man in Owenbeg to fist over the winner from a tight angle.