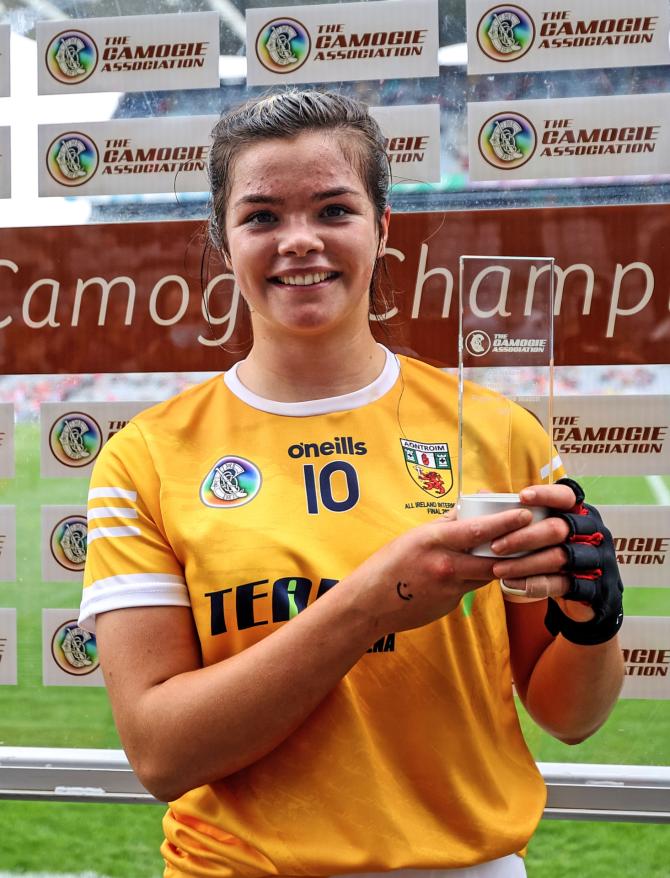 Player of the match Maeve Kelly.

A MAGNIFICENT Saffron side got their just rewards at Croke Park on Sunday afternoon, when, after previously suffering at the hands of both Wexford and Down, they brought the Jack McGrath Cup back North.

Seventeen years have elapsed since they last had that honour and, for some of the team, they must have felt, at times, that they were going to be Antrim's greatest underachievers.

They certainly buried that though when they demolished Kilkenny, with the final eight point winning margin absolutely no reflection of their class, poise and superiority and they are well deserving of all the superlatives that can be written about them.

Ruthless, brilliant, determined beyond belief with an ability to respond to Kilkenny scores immediately and with interest and above all classy performers, this Antrim squad will go down in history as one of the best the county has ever produced as they ply their trade at senior level next season.

Despite falling three behind in the opening five minutes, 0-4 to 0-1, player of the match Maeve Kelly's opening point within seconds of the thrown in gave some hint of what was to come once the nerves settled, and when Roisin McCormick batted over three unanswered points they were on their way.

It was a brilliant occasion and a thoroughly deserved victory for a special group.

Meanwhile, nearer home, and the last four of the Antrim senior hurling championship are known.

And the big news is that Loughgiel, for so long the kingpins on the Saffrons’ club scene, won’t contest the knock-out games.

The Shamrocks lost to Belfast rivals St. John’s and must watch on as the Johnnies, Rossa, Dunloy and Cushendall battle it out for the Volunteer Cup.

* For reports and reaction to all the local GAA action remember to pick up your copy of the paper each Tuesday...