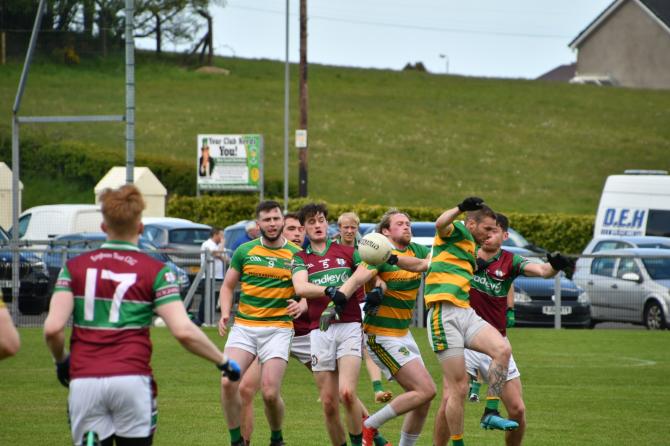 The league makes way for the championship this weekend across the Oak Leaf county.

THE Derry club football championships gets off the ground this week and, for the fireside supporter, most of the senior games will be live streamed for a fiver. If you want to take advantage of the full package it can be purchased for £30.

The championships will be played in group stages with the winner of a group meeting the bottom of another and the middle teams meeting in the cross over.

This looks like a two horse race between near neighbours Slaughtneil, the holders, and a Glen team that could come of age this term. In terms of quality, Glen have a formidable looking panel, particularly around the middle third, where Ciaran McFaul, Emmett Bradley, Ethan Doherty and Conor Glass operate.

Slaughtneil have won five titles in the last seven years, as well as three Ulster club titles. They have also contested two all Ireland finals. Like their neighbours, they too have a strong squad that has more experience in championship football than Glen.

Magherafelt cannot be discounted. They won the 2019 title and lost by four points to Slaughtneil in last year’s decider. For what it is worth, their league form has been poor; they made a lot of changes from game to game but, maybe, manager Adrian Cush was looking to get more game time into their younger players. They tend to be more than a bit defensive.

Lavey are a coming team but it will take time; they are also quite youthful and lack physique in certain areas. The Loup are a tried and tested lot who are never easily put away and they will be favourites to top group A which could more or less guarantee a quarter final spot.

Eoghan Rua are not the force they once were but they have been introducing younger players. They had some good league results against the middle range teams. They will not be out of their depth in Group B.

Newbridge are a young and up and coming team who are also in the same group as Eoghan Rua. Swatragh are capable of a big showing under new manager - the highly experienced former Antrim player, Kevin Madden.

The difference between league and championship is chalk and cheese but, after a rocky start, manager John McKeever remodelled his Bellghy team and they won their last six games. There is a great championship tradition in Bellaghy. After a poor run since they won the 2004 title, they now look to be on the up with a youthful team. Ballinascreen have a lot of improving to do after a dismal league campaign

Former strong senior teams Dungiven and Kilrea have a lot to do but not as much as Claudy and Foreglen.

Each team will play a home, away and neutral venue game in the group stages.

Lots of contenders for Intermediate title

The intermediate championship is the most open of the three. Holders Greenlough have hit form at the right time and have been winning games without key players. Manager Joe Cassidy seems to be able to get the best out of them at championship time.

Last year’s beaten finalists Steelstown also hit a run of form in the latter stages of the league and many see them as the team to beat now that Hugh McGrath is back as manager. They have a very strong panel and have a slick attacking unit.

Faughanvale came close to a place in the final last year and their side looked solid during the league. They are very strong at midfield through Eoin McElhinney and Oisin Quinn but they are not the finished article in attack.

A lot of eyes will be on Drumsurn after winning the league and beating Dungven, Foreglen and Banagher who will be playing in the senior championship. If they can keep up their league form they will be hard to beat but the championship is a step up from the league.

Limavady have a very good forward line and if they can tighten up at the back they can case a few surprises.

Glenullin had a poor enough league run with only three victories but they have a championship tradition. If Eoin Bradley is fully available they will be a threat but currently they are a work in progress.

Castledawson have won this title three times since 2010 but they have slipped back a lot in the last two seasons. Slaughtmanus need to improve on their poor league form while the young Lissan team didn’t win a single league game.

Doire Trasna struggled at junior level and they look to have little hope of any victories. Glack are capable of causing an upset but winning the title looks beyond them.

Ballymaguigan, despite winning Division Two, look to be another outsider and have lost their last six intermediate championship games.

Each team will have one home, away and neutral venue game.

There are nine teams battling for the junior title with the preliminary rounds played in three groups of three.

One team will drop out along the way to leave it straight knock-out at the quarter final stages.

Desertmartin won the delayed 2020 title with a narrow win over Craigbane and with an even stronger team this time they are hot favourites to keep hold of the Brolly Cup.

Since they took the 2020 title they have been strengthened by the inclusion of Lachlan Murray, Conor Shiels and Ryan McEldowney who were on the Derry All Ireland winning 2020 title team. They have a strong squad of skilful players and will be hard to stop.

Beaten finalists Craigbane have tiptoed through the league without ever having a full strength team and had a good enough campaign. A lot could depend on the fitness of Lee Moore who did not play in any of their league games.

Ballerin surprisingly lost their final league game away to Glack when a victory would have clinched the title. They have serious injury problems and this could stop them making a serious challenge.

Each team will have a home and away game.

Ballinascreen’s miserable league form would indicate that they will have their hands full against a fast and well organised Loup team manager by former Derry player Paddy Bradley.

Ciaran McElroy has been given the task of trying to turn good Balliascreen underage players into good senior players but that is a long bit away yet. The Loup’s better attack should see them though comfortably.

Ballinderry are always geared up for the championship even though at present they are one of the long shots. They face a lively young Newbridge team managed by Ballinderry native Karl Conlon.

It looks to be a pretty even affair but if league form is anything to go by then Newbridge look to be the better balanced team with plenty of youth and pace.

Ballinderry are not the force they once were but with players like Ryan Bell and Gareth McKinless around they never can be discounted.