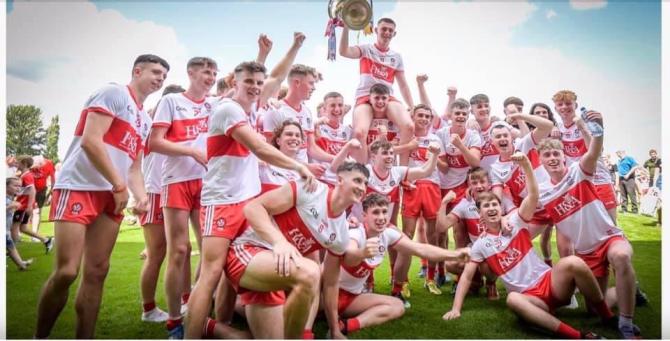 Derry Minors celebrate winning the 2020 All Ireland earlier this month.

JUST ten days after they won the 2020 All Ireland Minor title and 17 days since they won the Ulster title, Derry are back on the road again but with a virtually new team.

Only James McGurk and Niall O’Donnell are eligible in the current year but their leadership will be vital.

As fortune would have it, Derry meet Armagh in the Ulster Championship first round at Owenbeg this Wednesday evening at 7.30pm. In the 2020 competition they also met Armagh - last November at Owenbeg - but conditions will be a lot different this time.

Back in November, the game was played on a heavy pitch with Derry winning against a very defensive Armagh by 1-7 to 0-8. This time, it will be a very firm sod that should see both teams go out to express themselves.

Derry manager Marty Boyle and his backroom team have had the difficulty of managing both this and last year’s teams alongside each other and there is no doubt that the current squad will draw confidence from the exploits of the 2020 team.

With no Ulster league played this year, there is little form to judge the teams on but, traditionally, Derry have generally had the upper hand on Armagh in this grade in recent years.

Derry did manage to get in a challenge game against Fermanagh which they won comfortably and that will have brought them on.

The Oak Leafs will not want to be the shortest ever reigning Ulster and All Ireland champions on record.

The club standard of under 17 football in Derry is high so on that basis alone they will start as favourites.