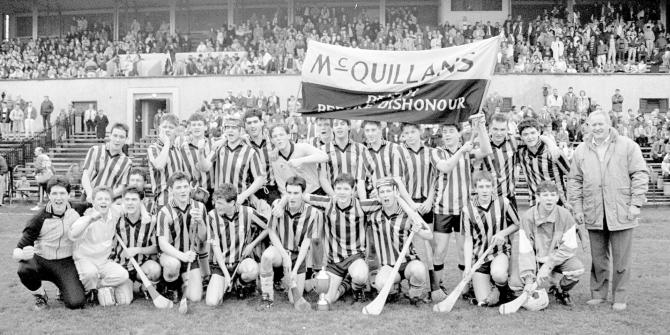 The way we were: Ballycastle minors celebrate county success at Casement back in 1990.

BALLYCASTLE won the Antrim Minor Hurling Championship title in 1990 when they beat Rossa in the final at Casement Park.
The young men from the ‘Town’ hadn’t lifted the title since 1978 but they bridged a 12 year gap with victory over Rossa to secure their 11th title at the grade.
The following report appeared in the Coleraine Chronicle:

Ballycastle won their first Antrim Minor Hurling Championship title since 1978 and their ninth in all when they beat O’Donovan Rossa in the final at Casement Park.
Although they dominated most of the first half, they squandered many scoring chances and at half time led by only five points - 1-4 to 0-2.
Their goal which came midway through the half was a superb effort from left half forward Ciaran Brown who volleyed to the net after a long free by Robert Ferguson.
Rossa improved dramatically in the second half and with centre half forward Joe McCaffery causing the Ballycastle defence a lot of problems they closed to within two points by the end of the third quarter.
Colm Roddy and Martin Devine exchanged points to maintain the two point gap but with just three minutes left to play, Rossa corner forward Seamus Shannon converted a free to cut the arrears to the minimum.
There were many heart stopping moments as Rossa pressed for the equaliser but the Ballycastle defence, in which full back and captain Owen Colgan was in brilliant form, held firm.
Just when it appeared that a single point would divide them at the end, the North Antrim lads produced a late flourish and a goal and a point from substitutes Brian McGuile and Colm Óg Lynn gave them the title by a five point margin.
Apart from Colgan, Ballycastle had great performances in Robert Ferguson, Mark O’Neill, Shane Brown, Colm Roddy and Benny Hill.
Rossa’s best were Peter Rogan, John Hamill, Jim Connolly and Joe McCaffery.