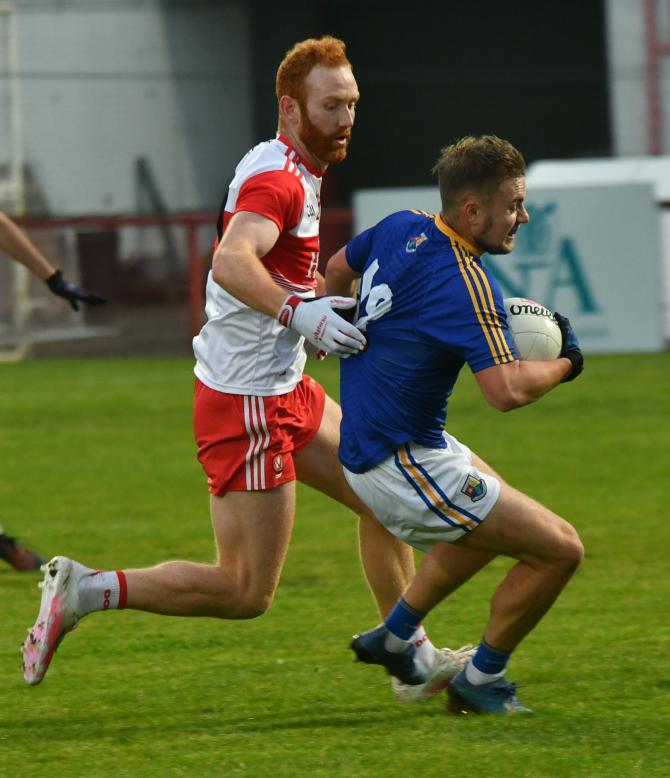 Conor Glass made a welcome return to Oak Leaf colours at the weekend.

FORMER Australian Rules Football star Conor Glass admits it’s great to be back after making his senior debut for Derry’s gaelic footballers at the weekend.

The Maghera man, who spent five years ‘Down Under’ after making the switch following a successful minor career, made an appearance as Rory Gallagher’s side defeated Longford at Celtic Park.

“That debut was four or five years in the making so, yeah, I am obviously happy to pull on the jersey for the first time,” admitted Glass afterwards.

“I had my first time back at training there on Wednesday and I felt a bit weird. The game has obviously changed since I last played it but it was great to pull on the jersey and just spend time with the boys.

“I went for a kickabout there on Monday and my foot was actually sore from kicking the ball because it’s a different sweet spot from the Aussie Rules ball but it was good to get back kicking about down on the Glen pitch. That was my childhood, I was brought up doing that to it was great to be back doing it.

“I’ve played this ground a fair amount of times so it was more about the excitement of just pulling on the jersey again with this team and hopefully in the future we can achieve something good,” he added.

The Watty Graham’s club man said it was great to come off the bench and play his part in the victory over the Oak Leaf county’s bogey team.

“To be honest I thought I had no chance of playing but then Rory told me it was best for my learning to actually get a bit of game time,” he continued.

“I only played 15 or 20 minutes but I felt like it did me the world of good, just to get my hands on the ball and get back out against an opposition. It definitely felt good.

“I played with a lot of the boys through Derry minors, through underage or school football, stuff like that so we have gelled together and had that chemistry before.

“Obviously then there are the older boys, the more experienced players like Chrissy and those type of boys, but it's good that we have a good crop coming through.

“Hopefully it will help us over the next 10 years.

“I'm still young and this year will probably not be my best year.

“It will take time to get used to the football again but whatever I can do to help the team over the next couple of weeks and especially against Armagh I'll do that and put my best foot forward.”

Derry complete their National League campaign against Offaly this weekend before taking on Armagh in the Ulster SFC at the start of November.