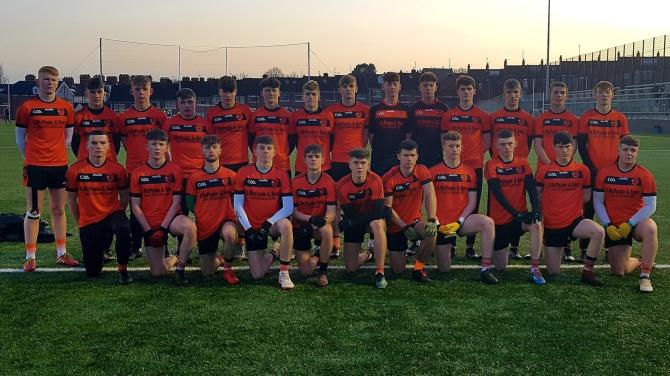 DERRY champions Lavey will look to build on the county's remarkable success in the Ulster Minor Club Football championship when they take on Donegal's Termon in the New Year's Day final in Belfast.

The McConville Cup has come to the Oak Leaf county an incredible 16 times since the tournment's inception in 1992, some way ahead of next best, Tyrone, with four titles.

But while the likes of Ballinderry and Glen have won the competition four times each, Lavey have never got their hands on the trophy.

However, there is a feeling abroad that this might just be the Erin's Own year.

They faced arguably their toughest test in winning the county title, a last-gasp goal at the end of extra-time seeing off the dogged challenge of Magherafelt.

The Breffini club - an amalgamation of Ballymachugh and Mullahoran - was seen off comfortably, setting up a last four clash for Lavey with Fermanagh champions, Enniskillen Gaels.

An inspired display from Matthew Downey, who helped himself to seven points, saw Lavey through to their first FonaCAB Ulster Minor Tournament final courtesy of a 0-11 to 0-5 win.

On the other side of the draw, meanwhile, Termon ran up a big score, 6-14, when defeating Emyvale of Monaghan at the quarter-final stage, having earlier accounted for Silverbridge of Armagh in the preliminary round.

But arguably their finest performance came in the last four when they shocked favourites, Kilcoo of Down, to set up an intriguing decider.

"It would be fair to say that Termon have beaten stronger opposition than Lavey, but this Lavey team is full of confidence and has the superbly talented Matthew Downey in attack.

"They also have players like James McGurk, Enda Downey, Jamie Duggan, Callum Downey and, of course, Matthew Downey, who have represented Derry at county minor level.

"Termon have a panel of 30 players, which is remarkable for a semi rural area situated in North Donegal between Letterkenny and Creeslough, and at adult level play in the senior championship but are not the force they once were.

"Despite Termon knocking out the favourites Kilcoo in the semi-final, they will be slight underdogs against Lavey who have been together since they were able to kick a ball.

"Derry clubs have a remarkable record in this competition. Since it started in 1992, the McConville Cup has come to Derry 16 times. Ballinderry and Glen have four titles each, Bellaghy three, The Loup two, Kilrea, Dungiven and Slaughtneil one each while Ballinascreen and Magherafelt have also contested the final.

"Next in line with titles is Tyrone with four, Antrim, Armagh, Down and Donegal three each, Fermanagh two, Cavan and Monaghan one each.

"If Lavey play as they can, their name will be added to the list!" adds Bernie.