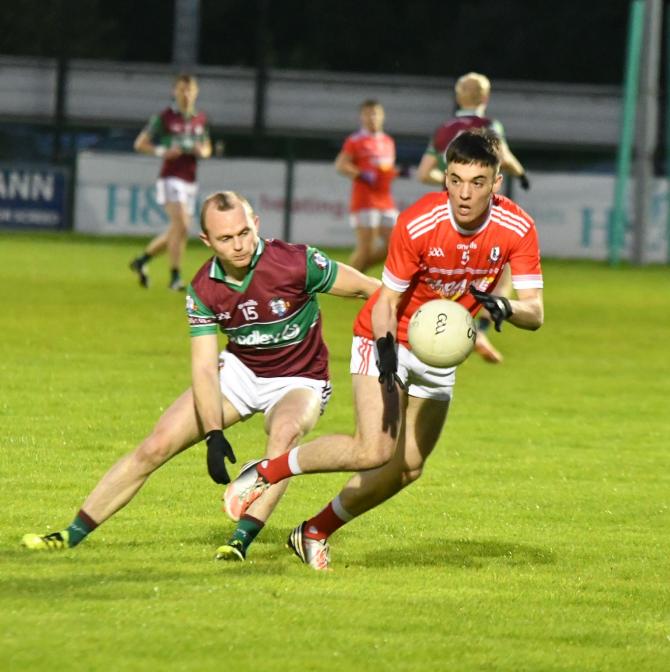 Emmett McGuckin believes Magherafelt's defeat of defending champions Eoghan Rua in the first round round gave them confidence to progress in this year's championship.

IT'S a final pairing few would have predicted at the outset of this year's Derry senior football championship.

But, perhaps, it's not all that surprising to find Watty Grahams Glen and O'Donovan Rossa facing off in Sunday's eagerly awaited decider at Celtic Park.

After all, both clubs have enjoyed plenty of success at underage levels in recent years which has laid the foundations for this weekend's meeting.

However, it’s not all about the ‘young guns;’ the older hands, too, will have their say in where the John McLaughlin Cup ends up come Sunday evening.

One of them is Magherafelt’s Emmett McGuckin, a man with bags of experience at club and county level, who concedes a first club county final is one he is relishing.

“It’s the biggest game of my career,” he admits freely.

“I was lucky to win an Ulster final at the start of my Derry career but this is definitely the biggest game of my career,” adds the 28-year-old.

Hardly surprising, since the Rossas haven’t reached this stage since 1983, when the bustling midfielder was still in primary school.

Opponents and neighbours Glen have fared even worse – this is the Maghera club’s first ever senior county football final - making it a novel pairing for the Oak Leaf county decider.

“It's a funny one,” continues Emmett, who also plays football for Coleraine FC in the Danske Bank Premiership of the Irish League.

“Every team in Derry probably says it's on their radar at the start of the season and you always hope you're going to get there. Thankfully it's us this year.

“It's been a long, long time and it's definitely welcomed in Magherafelt.

“You always aim to do your best and that has got us to a county final this year so we'll not complain.

“It's hard to put your finger on why it's different this year.

“But you get one game over you and you just wait for the next one, it's the same in any sport. You have to take each game as it comes.

“We've done that but, again, we'll be going in as underdogs against a very strong Glen team.”

Both teams have come through some stiff challenges on their way to the final – Magherafelt dumping holders Eoghan Rua out in the first round and Glen disposing of favourites Slaughtneil in the semi-finals.

And it was his team-mates' performance in downing Coleraine that convinced Emmett that Magherafelt could make an impression this season.

“We always had belief that we could do a job on anybody but we just showed that wee bit of resilience this year, especially in the last ten minutes against Eoghan Rua,” he says.

“After we scored the goal it was even more impressive. The young boys stood up: Deccy Martin came off the bench that day, he won a kick-out that he had no right to win. He played a great pass inside and we got a score from it – it's those small things that make the difference.

“We have a lot of younger players that are playing with no fear. They just go out and play their own game.

“They've been used to winning throughout underage but we're going in against a very strong Glen team and we'll be definitely up against it.

“It’s nice for both teams and both towns - and good for the county - that there are two different teams in the final," he adds.