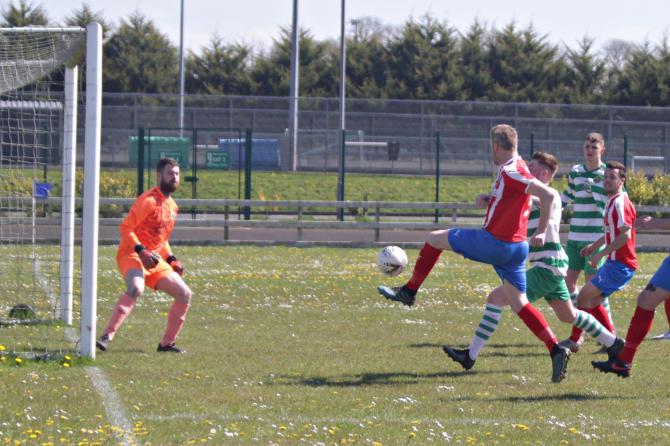 Glebe's Darren Henderson goes close as his strike comes off the upright in the Ballymena Intermediate League match against Donegal Celtic at the Riada Stadium. WK17KC13BMSP

AHOGHILL Thistle Development and Belfast Athletic will meet in the final of the Linda Welshman Memorial Cup after them winning their semi-finals games on Saturday.
The Intermediate Cup games are at a standstill due to an appeal from Desertmartin FC to the IFA against a decision of the League Committee who ruled Desertmartin had played a player in January who was registered prior to the Registration Window opening on January 1st 2022.
The destination of the Intermediate Division Title is also in doubt at present. Belfast Celtic have lodged an appeal to the IFA against the League Committee ruling that Belfast Celtic forfeit all games a player who the Committee claim was a registered Cliftonville FC and not Belfast Celtic who had also registered the player.

Both defences were on top in this game with the first goal being a converted penalty on the 51st minute by Shane McKernan putting Celtic ahead.
Time was then running out when Emmett Templeton scored a second goal for Celtic on the 87th minute before Ballymoney got a goal back when Gareth McLaughlin converted a penalty on the 92nd minute.
Referee: Mr Jason Gillespie.

Wakehurst went in front after Andrew Laughlin scored on the fifth minute and held this lead until Ryan O’Neil equalised for Brantwood on the 38th minute.
Brantwood then went in front after Richard MacAuley scored on the 58th minute.
Wakehurst came back with Aaron Smyth scoring on the 74th minute for a share of the points.
Referee: Ms Arleen Campbell

The Youth went in front after Lee Glasgow scored on the 17th minute and still led by this goal at half-time.
Dunloy got back level after Niall Johnston scored on the 48th minute which was the final goal in the game.
Referee: Mr Marty Woods

Both teams had chances to scored but no goals were scored at half-time.
The Martins went in front after Lewis Baldrick scored on the 47th minute then goals scored by Jackie Todd and Josh McIlroy on the 63rd and 78th minutes saw Ballynure in front.
The Martins got back level after Ross Rankin scored on the 94th minute to level the scored only to see Josh McIlroy score his second goal on the 95th minute to win the game for Ballynure.
Referee: Mr Gareth Corrigan