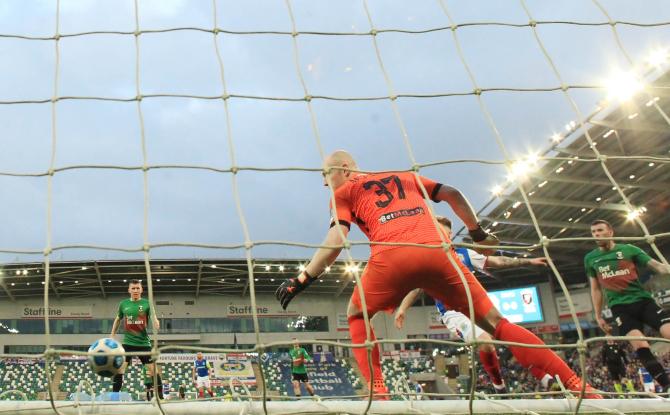 Warrenpoint Town are as good as down after suffering defeat to Carrick Rangers.

Luke Wade-Slater had given the County Down side the lead at Milltown but an Alex Gawne brace secured the win for the visitors.

The Ports also lost during their trip to Ballymena United. Billy Steadman had given Paul Doolin’s men the lead, however the Sky Blues rallied in the second half and goals from Paul McElroy and Steven McCullough gave the hosts a big three points.

With Glenavon losing 3-2 to Dungannon Swifts, the race for the final playoff spot has opened up once again with just one point separating the Lurgan Blues and the Braidmen.

James Convie put the Swifts in front inside a minute at Stangmore Park and it was 2-0 when James Knowles scored from the penalty spot.

Glenavon got back into the game thanks to a Garry Breen own goal and a screamer free kick from Conor McCloskey, however a Matthew Snoddy own goal seven minutes from time gave Dean Shiels’ side the win.

At the top half of the table Cliftonville failed to take advantage of Friday night’s draw between the Big Two.

A win against Larne would have moved the Reds top of the table but they could only play out a 0-0 draw.

At Windsor Park Jordan Stewart had given league leaders Linfield the lead but Conor McMenamin gave Glentoran a share of the spoils.

It means that Cliftonville remain a point behind Linfield while Glentoran are six points off the top.

In the weekend’s other game Crusaders thumped Coleraine 4-1.

Adam Lecky, Paul Heatley, Daniel Larmour and Jude Winchester found the net for the Crues with Josh Carson scoring a stoppage time consolation for the visitors.