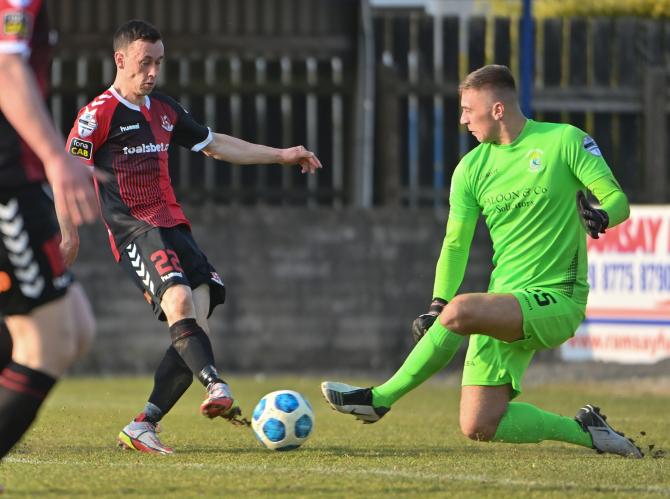 Paul Heatley finds the net for Crusaders against Dungannon Swifts.

It has been another action-packed weekend in the Danske Bank Premiership!

The game of the day was undoubtedly at the Coleraine Showgrounds where 10-man Glenavon held on to beat the Bannsiders.

Great goals from Peter Campbell and Matthew Fitzpatrick had put the Lurgan Blues in front. Coleraine then hit the post three times in a matter of minutes before Jack O’Mahoney added a third for the visitors.

Anyone who thought the game was over as a contest was mistaken as Coleraine pulled a goal back through Kirk McLaughlin. A melee followed and Glenavon goalkeeper James Taylor was sent off.

Curtis Allen made it 3-2 from the penalty spot but the Bannsiders were unable to add to their tally.

The win takes Glenavon above Ballymena into seventh, who had leapfrogged the Lurgan Blues on Friday night thanks to their win over Larne.

The Sky Blues opened the scoring as early as the fourth minute through David Parkhouse who found the far corner with a calm finish after connecting with Sean Graham's cross from the left.
Ben Doherty buried the ball at the second attempt after his initial effort rebounded back to him to pull the scores level.

United skipper Leroy Millar sent Devlin the wrong way from the spot after Albert Watson had handled in the area.

And the points were sealed on 69 minutes when, following great work down the right from Waide, Parkhouse was on hand to nod home from close range to double his tally.

In Saturday’s early kick-off Linfield survived an early scare when Steven Ball fired Warrenpoint in front, heading home at the far post after Daniel McKenna had flicked on Ray O'Sullivan's throw-in from the right.

The league leaders levelled in first half stoppage time thanks to Jordan Stewart’s low shot into the bottom corner.

And they won the game in stoppage time at the end of the second half when a Jack Hastie corner was powered home by Ethan Devine from close range.

In the day’s other game Crusaders recovered from an early setback to beat Dungannon Swifts 4-2. Rhyss Campbell put the Tyrone side ahead but Adam Lecky levelled the scores from close range.

Two goals from Paul Heatley and a Brandon Doyle strike earned the Crues all three points.

There's one more game to come with Glentoran and Carrick Rangers meeting on Monday evening, kick off 7.45pm.