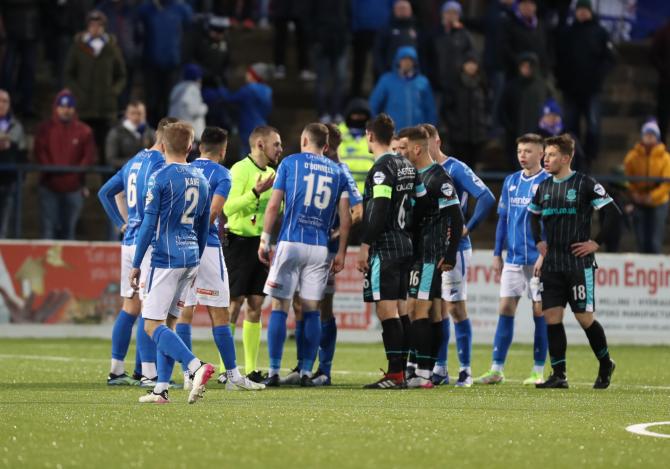 Controversy reigned the last time the two teams met at the Coleraine Showgrounds.

NO one needs reminding of what happened the last time Linfield visited the Showgrounds.

Back at the start of December, the Blues inflicted a 2-1 defeat on Coleraine, a first home defeat in over a year for the Bannsiders.

It wasn't the result that people remember, however; it was more the manner of Linfield's winner from Stephen Fallon that sticks in the mind.

A good strike it was from the midfielder but there were claims that the ball had struck match referee Tim Marshall in the lead-up to the goal.

Despite lengthy protestations from the home side the goal was allowed to stand and Linfield went on to collect the three points.

The nature of that defeat appeared to have had a lingering effect on Oran Kearney and his team and it's fair to say they've never been quite the same since.

Now, they have the chance to put things right, though, knowing Oran Kearney, thoughts of revenge won't be uppermost in his pre-match thoughts come Saturday.

He will simply be keen to see his players take the good bits from Tuesday night's loss at Glentoran and repeat them in front of what is sure to be a huge crowd on the Ballycastle Road.

"It wasn't the ideal start against Glentoran in midweek but we hung in the game and against the full-time teams you've got to show that mentality," said Oran.

"It was a good away performance and when we got our goal with about 15 minutes to go it looked like we were in for a grandstand finish. That makes the last couple of minutes even more disappointing.

"To me, it should have been us pushing on and asking that question of trying to get a winner rather than them.

"It's been a tough period for us but the one thing I'll never question our lads on is their attitude, their work ethic and their effort. We always get that in abundance.

"It would be great to get a result on Saturday and we were disappointed at the manner of the Linfield result the last time.

"I thought we did more than enough that day to take something from the game but we've just got to keep working.

"It's a tough week – a third game in seven days – and when you've got the 'Big Two' as part of that it makes it even tougher.

"But we'll never doubt the boys' endeavour and attitude and I'm sure we'll be ready for Saturday," he added.

The home side go into the game in sixth place in the Danske Bank Premiership table, though they could start the day in seventh should Ballymena Utd get the better of Cliftonville on Friday night.

Both are on 34 points, a barely believable 19 points behind David Healy's table toppers, their main concern now ensuring that they are in the mix for the end of season European play-offs.

Coleraine have won just one of their last five in the league while Linfield are unbeaten in the same period, boasting three wins and a draw.

They will start the game as clear favourites to continue their fine form against a misfiring Coleraine side who look set to include former Glentoran striker Andrew Mitchell in the matchday squad for the first time.

The 28-year-old only joined the club on Thursday night but may find himself playing some sort of role against the Blues as Coleraine look to reignite their season.

Otherwise, the squad is set to be along similar lines to Tuesday.

* Check out Tuesday's paper for report and reaction to Saturday's game.