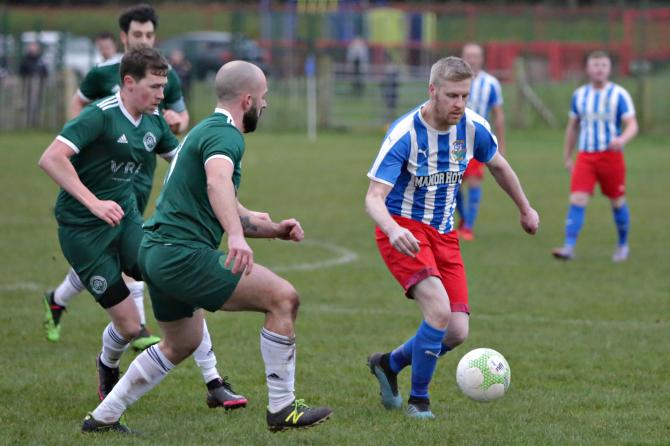 FORMER Coleraine and Ballymena Utd striker Darren Henderson showed he has lost none of the abilities which made him a top-class Irish League striker back in the day when he scored twice to help his latest club, Glebe Rangers, to a hard-fought 3-2 win at Dunloy last weekend.

It was an important win for the Glebe who leapfrogged 'Toon' rivals Ballymoney United into fourth place on the back of the win.

United, of course, were inactive in the league. Instead, they were busy defeating Portstewart in an entertaining Intermediate Cup tie.

Dunloy, meanwhile, remain in eigth place in the table, alongside Brantwood on 17 points.

This weekend, Glebe Rangers will look to build on the momentum of that win over Dunloy when they host Coagh United.

The mid Ulster side begin the day in tenth place in the league but they did win their most recent outing, their first victory in five games.

Their opponents have won three and lost two of their last five and are expected to make it back to back wins against Coagh.

Ballymoney Utd return to league action with a game away at Cookstown Youth and they will travel to the Mid Ulster Arena full of confidence.

They have won their last two games and with recent signing Conor McGovern among the goals they will fancy themselves to get the win over the team currently in 12th place.

Finally, Dunloy are also on their travels, away to Donegal Celtic.

The Villagers are in something of a poor run at the moment, having lost their last four league games, and may find the going tough at Suffolk.

Reports and round-up in Tuesday's paper...