He's a keeper: Gareth Deane signs new three and a half year deal

“He’s nowhere near his peak, he will still get better and we look forward to that being with us.” Oran Kearney. 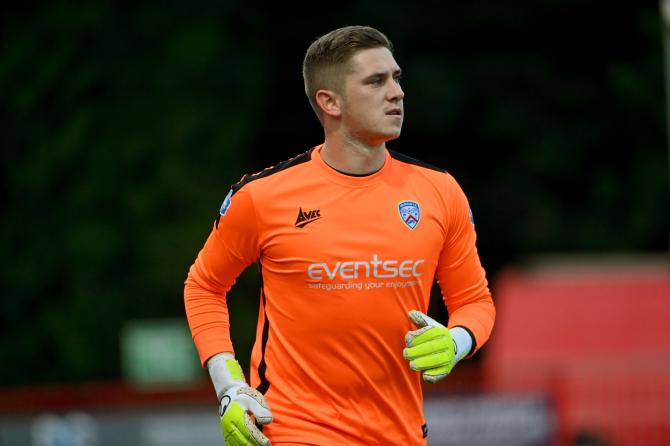 COLERAINE FC is delighted to reveal that Gareth Deane has become the second player this week to sign a contract extension with the club.
The shot stopper has agreed terms on a new three-and-a-half year deal that will see him remain at The Showgrounds until the end of the 2024/25 campaign.
Deane joined Coleraine at the beginning of the 2020/21 season from Linfield and has registered 25 clean sheets from 50 games.
The ex-Carrick Rangers loanee played a pivotal role in the Stripes’ memorable European run last year and is a fans’ favourite on the Ballycastle Road.
Boss Oran Kearney expressed his delight at the news and believes the 27-year-old is only going to get better.
“Gareth arrived here with big pedigree and to be fair to him, when you look at his time at Linfield bar a bit of bad luck I think that was the reason why he didn’t make more appearances,” he continued.
“No-one was doubting the quality of ‘keeper that was there but a couple of freakish injuries meant he struggled to put a string of appearances together.
“I think the big thing of him signing here was and I stressed this to him was that we needed 40 to 45 games out of him and to really kick on and play as many games as possible.
“Bar the one freak injury after the save against Linfield where he was reached across and the tendon has gone in his thumb, which nobody could legislate for, he has been outstanding in all aspects of it.
“He’s been fantastic as a person because we are so fussy about who we bring into the changing room and the standards he has set from a goalkeeping point of view has been sensational.
“The pleasing thing for me is that his best years as a goalkeeper are still ahead of him.
“He’s nowhere near his peak, he will still get better and we look forward to that being with us.”