Bannsiders' boss taking nothing for granted against Dungannon 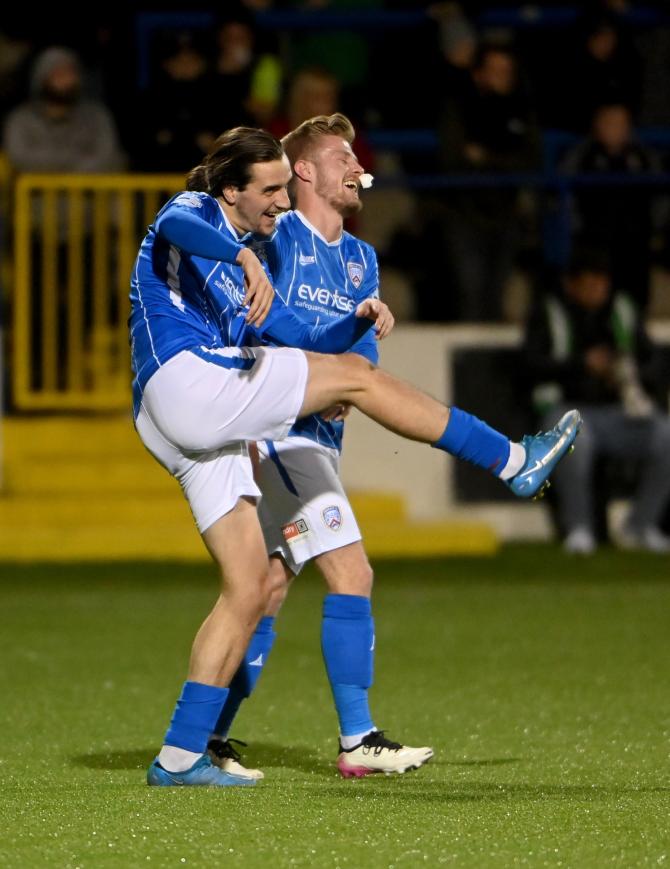 Jamie Glackin celebrates with team-mate Lyndon Kane after opening the scoring against Glentoran on Tuesday night.

LEAGUE Cup progress safely secured, it's back to the bread and butter of the league for Coleraine this weekend as they welcome Dungannon Swifts to the Showgrounds.

The Bannsiders go into the game in confident mood, having despatched Glentoran 2-0 in Tuesday evening's Bet McLean League Cup quarter-final.

Former Swifts midfielder Jamie Glackin and top scorer Matthew Shevlin scored the all important goals for the home side in midweek but equally important was the clean sheet kept at the other end.

The hosts have yet to give up a goal since taking to the new synthetic surface at Ballycastle Road and haven't tasted defeat in any competition since the league loss to Cliftonville at the end of August.

However, they boast a number of talented players including former Ballinamallard Utd and Ballymena forward Ryan Mayse and club captain Oisin Smyth.

Former Coleraine player of the year, defender Aaron Canning, and Tyrone's All Ireland winning goalkeeper Niall Morgan, add experience to what is largely a youthful squad.

"There's a certain way that they'll try and play and the pitch will maybe help them," said Oran.

"We've got to be on it again on Saturday and we've got to make sure we go and get a good performance.

"They've shown in lots of games this season that they've caused teams problems and picked up points along the way so we need to be at our best," he added.

Coleraine won the first game 5-0 between the sides at Stangmore Park earlier in the season and will look to make it a double this weekend as they look to build on the momentum of Tuesday's defeat of Glentoran.

"The key thing is that we hold this trophy and have a big pride in trying to keep it here for another year," continued Oran.

"I've great memories of the semi-final and final and so do a lot of players in that changing room so we've got to go hard at and got to try and progress.

"For as lacklustre as we were at times on Saturday against Carrick we had no passengers tonight and the boys were right on the money.

"Glentoran showed at times that they can be very hard to play against but credit to our boys I thought they were brilliant," he added.

Non season ticket holders are reminded that they will require matchday tickets for the visit of Dungannon Swifts.