Bannsiders produce professional performance to see off challenge of Glentoran 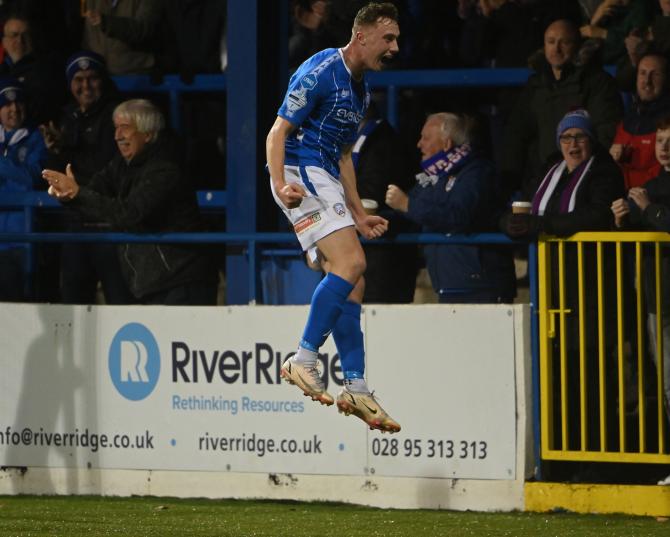 Before this game, Bannsiders' boss Oran Kearney stated that as holders of the Bet McLean League Cup trophy they didn't want to let it go.

His players backed up their manager on Tuesday night with a professional performance of skill and determination to defeat Glentoran 2-0.

The result sees the Showgrounds side book their place in the last four of the competition, along with Ballymena Utd, Cliftonville and Warrenpoint Town.

United came from behind to defeat Linfield 3-1, Warrenpoint Town easily accounted for third tier Limavady Utd while the Reds required extra-time to get past a dogged Portadown side.

There was no such drama at Coleraine where the home side scored a goal in each half to record an ultimately comfortable win.

Conor McKendry had already struck the crossbar with a lob inside the opening ten minutes before he set up Jamie Glackin for the opening goal.

The move which led to the Coleraine goal actually started with a Glentoran corner, the ball being cleared as far as Glackin just inside his own half.

He swept the ball across field to McKendry who raced forward before returning the ball to Glackin who steadied himself before slipping the ball past Glens' keeper Ross Glendinning.

Glentoran responded well but Coleraine should have doubled their lead before half-time when Aaron Traynor headed wide from close range from a Glackin free-kick.

The away side began the second half in determined fashion and dominated much of the possession.

They created a large number of corners but found the home defence and goalkeeper Gareth Deane in unforgiving mood.

They repelled everything their opponents threw at them in that period when a goal for the Glens could have changed the outcome of the match.

But they didn't and Coleraine made them pay, in form striker Matthew Shevlin capitalising on some erratic Glentoran defending to fire home his side's second towards the end.

Mick McDermott threw on five subs in an attempt to get something from the game but the hosts were equal to anything Glentoran could muster.

In the end, this was a satisfying win for Coleraine, not only because it books their place in the last four of the season's first domestic cup competition but because it was an antidote to Saturday's below-par display at Carrick Rangers.

Yes, Glentoran dominated possession for long periods and, yes, they had more efforts on goal but the only stat that matters is how often the ball ends up in the opposition's goal.

In that respect, Coleraine emerged triumphant and continue on their odyssey of retaining the Bet McLean League Cup.