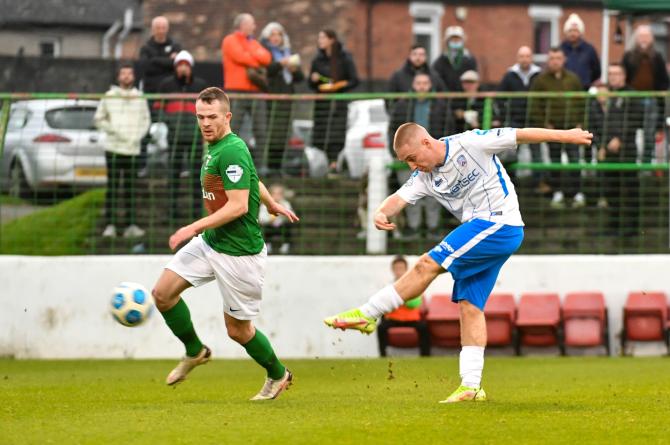 Coleraine host Glentoran in the quarter-finals of the Bet McLeague Cup on Tuesday night.

THE BetMcLean League Cup quarter-final line-up was confirmed on Tuesday night following third round victories for Limavady United and Linfield.

The Roesiders caused the upset of the round with a memorable 3-2 defeat of Dungannon Swifts at The Showgrounds.

The Premier Intermediate League side raced into the lead after barely 15 seconds when Ryan Doherty lobbed the ball over Swifts keeper Niall Morgan.

Dean Shiels' side levelled early in the second half through Cahal McGinty but Limavady regained the advantage soon after Dean Brown beat the offside trap to slot past Morgan.

The Swifts equalised for a second time on 70 minutes, this time through James Convie's finish into the far corner after Ryan Mayse's delivery was nodded into his path.

However, Limavady moved back in front once more with 11 minutes remaining - and this time it proved to be final - when Alex Pomeroy slotted home from the spot.

At Windsor Park, Linfield hit no fewer than 11 goals as they swept past the PSNI.

Billy Chadwick claimed the match ball with a hat-trick but the scoring was opened by 16-year-old Callum Marshall.