NI can look forward with optimism to Euros draw 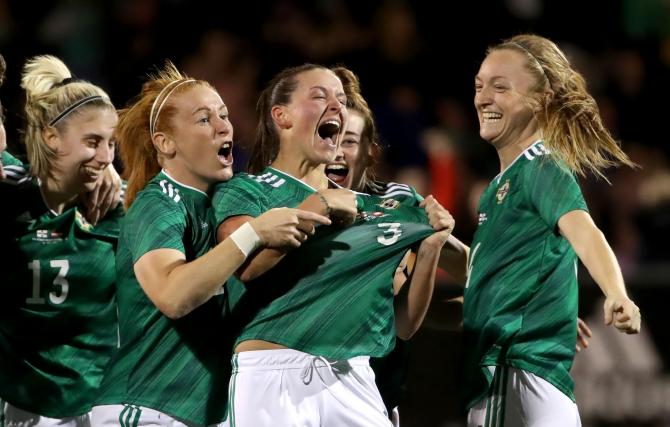 AFTER the heroics in the World Cup qualifiers over the past few days, thoughts turn to next summer's Euros for NI Women's team when the draw for that competition is made on Thursday.

Kenny Shiels' side, of course, are in the draw, the lowest ranked team in the tournament, but they will have been buoyed by their performances against two of the top sides in Europe in the past few days.

On Saturday they showed remarkable resilience to keep England out for over an hour before finally going down 4-0 at Wembley and then, just three days later, came within seconds of causing a major upset, conceding late on to draw 2-2 with Austria at Seaview.

Goals from Lauren Wade and Debbie Vance, a peach of a free-kick, had seen the home side recover from a 1-0 deficit to lead 2-1 but they couldn't hold on and a draw it finished.

Despite the disappointment of conceding so late, the performances have given the squad plenty to build on in the coming weeks and months.

"We are looking forward to see who we are going to get," Coleraine's Lauren Wade told BBC Sport NI.

"Obviously, it's the first time, but we are really excited and we want to kick on.

"Every team will be tough in the draw but it gives us confidence that we are going to be able to compete," she added.

Her manager Kenny Shiels, a one-time Bannsiders' boss, had nothing but praise for his players afterwards.

"I couldn't believe the performance of the girls, everyone in the country should be so proud of them," said a very proud manager.