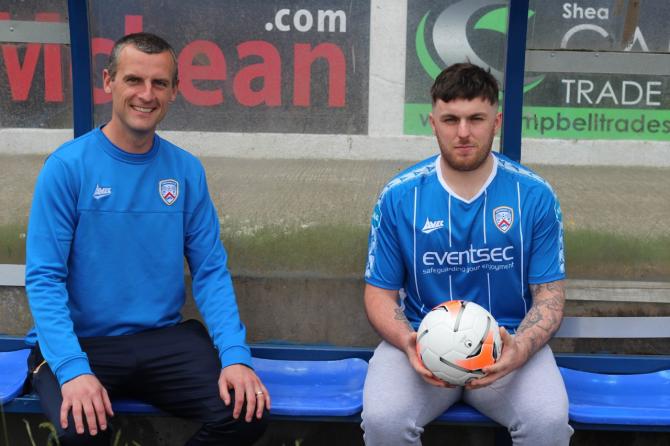 The Drumsurn man has struggled to get into the starting line-up since his summer switch from Carrick Rangers, where he was on loan from Ballymena Utd.

An injury picked up in pre season halted his progress at the worst possible time and he was forced to watch as Matthew Shevlin dominated the goalscoring charts.

However, with 'Shevy' rested from the start against the north Down club, the opportunity was there for Friel to stake his claim.

And how he did, notching just the second treble of his senior career.

"I was talking to Paul Owens coming here and I just said that I needed to get a goal," admitted the 26-year-old afterwards.

"I fully believe that getting my first strike will kick start me, and incredibly, my last hat trick was here against Ards for Ballymena United.

"I think it was meant to happen, I'm buzzing to get off the mark, and despite the last one being a bit lucky, they all count.

"For the first goal, I could sense the defender getting tight to me so all I could do was nutmeg him and I fancied myself when one-on-one.

"To be fair to Lyndon, he was happy to give me the ball for the penalty and I was relieved to see the ball hit the back of the net.

"It was good to get those types of goals and they are ones you'd expect from a striker.

"I had been training well, doing everything that I could and felt fit then the injury happened at the worst possible time. But I've recovered quicker than I was expecting.

"There is plenty of competition of places in the attacking areas.

"Oran challenged me to take my opportunity tonight and hopefully I've done that.

"I know we have a few knocks at the minute but I'll be ready if called upon."

Whether his performance is enough to earn him a place in the starting line-up for Saturday's visit to the National Stadium remains to be seen.

"It's been tough for him, frustrating," admitted Bannsiders' boss Oran Kearney.

"He picked up an injury in pre-season which really set him back.

"He'd got himself in good shape and the legs were going well and everything was looking good, then he picked up an injury that set him back a few weeks

"I think he just needed that against Bangor, he's been itching to get going and to show what he can do.

"We gave him a three year contract for a reason – he's 26, he's a goalscorer – and all of his goals on Tuesday were different goals but they're all goals that strikers score so you can never have enough of those in your team.

"It's great for him, I think it'll be a good lift for him and hopefully he can kick on now," he added.