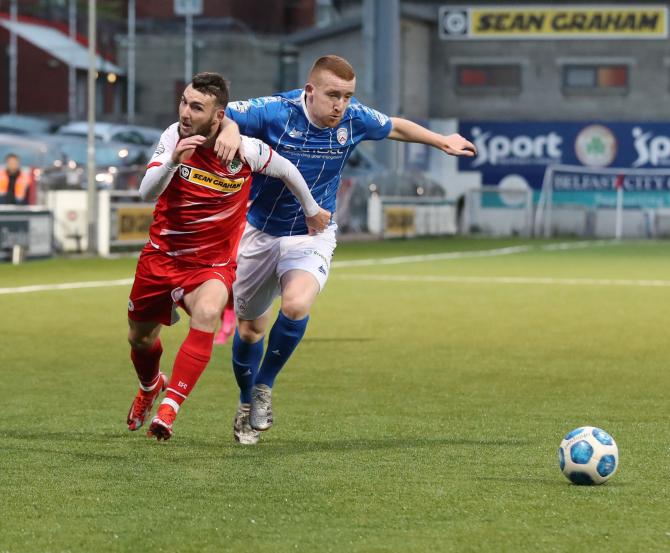 Coleraine lost at Cliftonville in midweek.

COLERAINE manager Oran Kearney says his players must put in a top performance if they are to record a first win of the season at Carrick Rangers on Saturday.

The Bannsiders have lost their opening two games at Larne and Cliftonville and are rooted to the foot of the fledgling Danske Bank Premiership table.

“It will be another tough away game," warned the Ballymoney man.

“I keep saying to people that this league keeps getting better but this year in particular I think it’s frightening the length that all clubs are going to in relation to be competitive and the players they are going for.

“It’s important we stick to our guns and not get carried away to try and do things we can’t do.

“Carrick have strengthened well, it’s always a tough place to go and so we know we have to put in a top performance.

“I watched them against Cliftonville and they were unfortunate to not get anything from the game.

“They got their win on Tuesday night so they will be coming all guns blazing so we have to match that," he added.

Reflecting on the team's stuttering start to the season, Kearney had this to say:

“We were stung with momentum on Friday night and the same at Solitude," he said.

“We probably had our best spell of the game and then we concede a goal which is frustrating and disappointing.

“It’s not easy, we have had two tough away games at Larne and Cliftonville, but we just have to dust ourselves down and try and go again.

“Its early days and we are in a different scenario because every team has had a home and away game but we’ve had two tough fixtures never mind those being away.

“We know we will get a run of home fixtures and the big hope is to pick up as many points as we can on the road, so when we get at home, we can make a real charge at it and try and climb.

“It’s frustrating we have no points to show for our opening two games, there have been some positives and some negatives as well, but we have to get on with it."

Coleraine will come up against some familiar faces on Saturday with former players Emmet McGuckin, Alex Gawne and Stewart Nixon all part of Stuart King's new look squad.