Minute's silence observed prior to pre-season friendly victory over Dergview 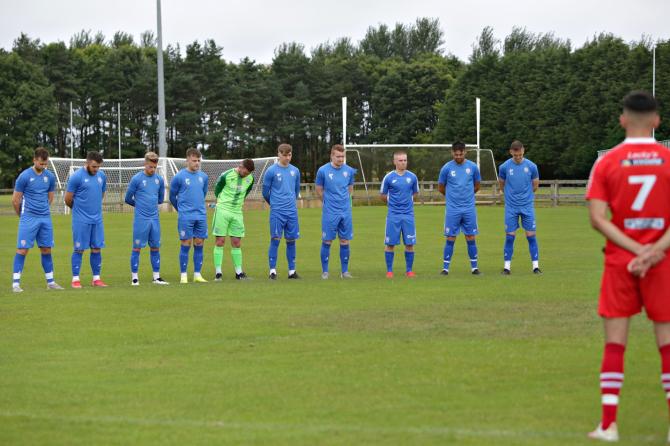 Players from both sides observed a minute's silence prior to Saturday's pre season friendly between Coleraine and Dergview at Ulster University on Saturday.

COLERAINE continued their pre season preparations with a comfortable 5-0 win over Dergview at Ulster University on Saturday afternoon.

Before the game, both sets of players, management and supporters observed a minute's silence in memory of former player, coach, manager and Honorary Life Vice President Victor Hunter who passed away that morning.

Once play started, it took the Bannsiders less than five minutes to impose themselves on their opponents, taking the lead through a Cathair Friel header from a Conor McKendry free-kick.

Indeed,  the recent signing from Larne, who moved north as part of the deal which took Ben Doherty to Inver Park, enjoyed a positive debut for his new club.

He proved a constant thorn in the opposition defence and his efforts were rewarded when he doubled his side's lead with his first goal for the club following good work from Eoin Bradley.

Bradley, along with Friel, made way at the half-time break to be replaced by James McLaughlin and Matthew Shevlin, and both made their prescence felt in that second 45 minutes.

First, McLaughlin headed home from a McKendry corner before Shevlin expertly finished after being released by Aaron Traynor.

Former Ballymena man Shevlin continued to look dangerous and he fittingly scored the final goal of the afternoon near the end.

Oran Kearney will be reasonably pleased with the run-out, especially as a number of important players were missing.

However, one aspect of the game will bother him - a missed penalty from Eoin Bradley.

At one time a source of great angst, the problem had largely been solved by the unerring accuracy from the spot of Ben Doherty.

Now that he has gone to pastures new, manager and players must find a new penalty kick king before the season starts in just under a month's time.