“We have done our homework” - OK 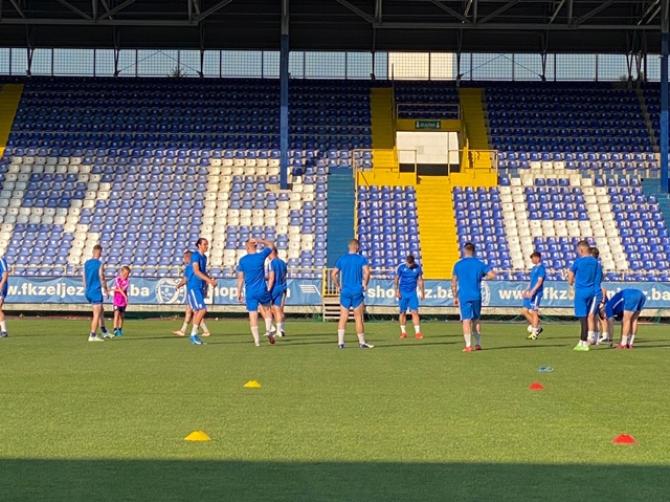 Coleraine players training at the Stadion Grbavica on Wednesday.

COLERAINE boss Oran Kearney has challenged his players to keep the tie alive as they face FK Velez Mostar in the first qualifying round of the Europa Conference League.

The Bannsiders arrived in Bosnia this afternoon and trained at the Stadion Grbavica ahead of tomorrow evening’s clash (KO 7:30pm).

With temperatures set to hit over 30 degrees by the time kick-off rolls around, Kearney hopes his players can repeat their European heroics from twelve months ago.

“We are delighted to be here and we are looking forward to the game,” he said.

“Like every team who qualifies for Europe, the reward is the adventure of going to countries and facing new teams.

“We, like everybody else, had a very tough season to get to this point and we are now looking forward to the game.

“The objective is to try and get through to the next match and we had a brilliant experience in the Europa League last year with some excellent memories.

“As a group and individuals we are keen to do the same again.”

Kearney acknowledged that software has played a big part in conducting research into the Bosnian side but knows they will want to impress in their first European outing in 33 years.

“That’s a top secret,” Kearney joked when asked of a specific player his side will have to watch out for.

“I’m sure it’s the same for FK Velez as there is a lot of software out there that you can use to obtain information.

“It’s been interesting to look at Velez’s history and I think this will be their first European fixture in 33 years, so they will be looking forward to it.

“With the research we have done, we know they are quite an impressive team and I know they’ve just signed a striker from Romania, so we have done our homework.”

The Stripes will host the second leg at Mourneview Park seven days later and Kearney knows the importance of having something to play for.

“It is slightly different this year in relation to the fact it is now two legs rather than one,” he concluded.

“They have also scrapped the away goal rule format so it’s slightly changed the outlook.

“It is important that we take something back with us for the home leg.”