Last weekend before the split 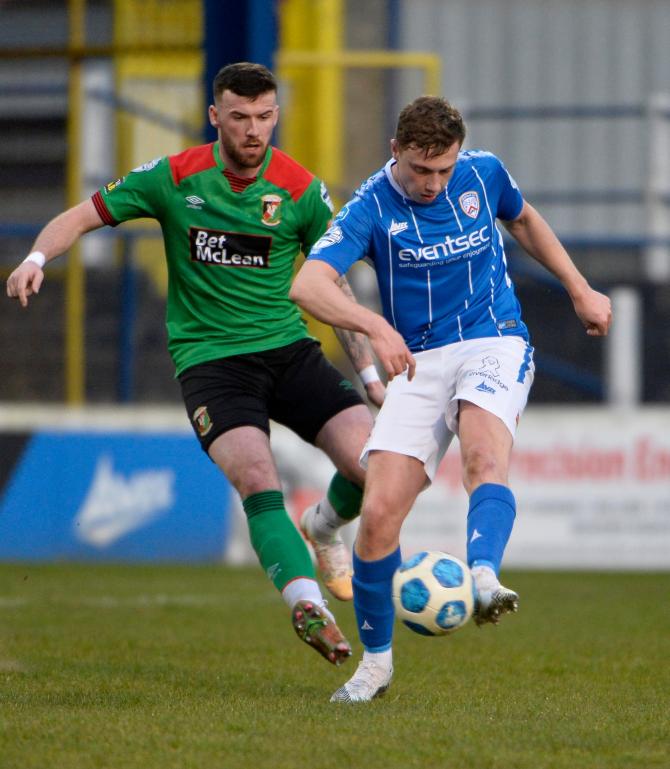 Matthew Shevlin has been in fine form for Coleraine recently.

THE final weekend of the regular season is upon us, with the all important running order of the final five games up for grabs.

The weekend kicks off this evening (Friday) with the meeting at the Oval of the two clubs which sandwich Coleraine.

Second-placed Glentoran play host to Larne in fourth place with plenty riding on the game - as much for third-placed Coleraine as the two protagonists.

A win for the Glens would see them stretch their advantage over the Bannsiders to four points, ahead of Coleraine's trip to Ballymena Utd on Saturday.

Victory for Larne, however, would see the Inver Park men close to within a point of Oran Kearney's side.

A draw would probably be the favoured outcome from a Coleraine point of view, particularly if they claim maximum points against David Jeffrey's side the following day.

It's been something of a stop-start season for Ballymena who can not make the top six, even with victory over their derby rivals.

They have enjoyed some notable wins this campaign, not least the opening day 1-0 triumph at the Showgrounds, but have never reached the levels of consistency required of a top six team.

Saturday marks the second meeting of the sides at Warden Street Showgrounds this season, a rare Lyndon Kane goal sealing the three points for the visitors back in March.

A similar performance will be required if The Stripes want to get back to winning ways following successive draws against Glentoran.

Elsewhere, league leaders Linfield will look to take another step closer to a 55th title when they visit Mourneview Park in Saturday's tea-time kick-off.

The Blues require just three more wins from their final six games to get their hands on the Gibson Cup again.

Cliftonville, defeated by Glentoran in midweek, will look to bounce back when they entertain Carrick Rangers while Warrenpoint Town and Portadown go toe to toe at Millton.

Following this round of fixtures, league bosses will reveal details of the post split games for each club.