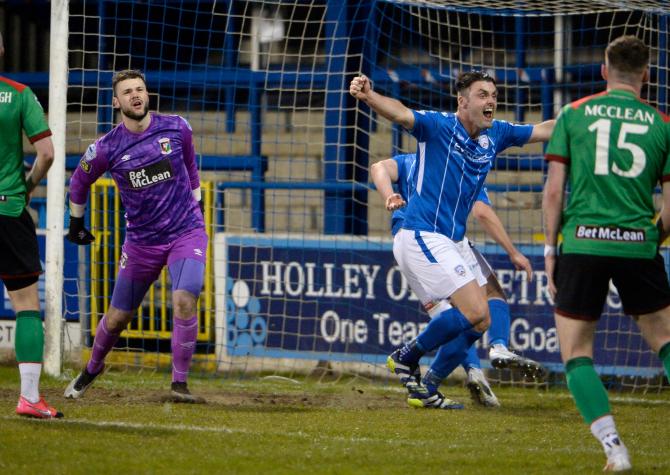 COLERAINE and Glentoran drew for a second time in a matter of days at the Showgrounds on Friday when Linfield, without even playing, were the real winners.

The Blues are now eight points ahead of second-placed Coleraine with a game in hand. They host Ballymena Utd on Saturday afternoon.

The Glens, meanwhile, remain two points behind the Bannsiders but have played a game less.

That sums up perfectly the close nature of this season's race for the Gibson Cup and which was reflected in Friday evening's game at Ballycastle Road.

The teams have met on three occasions this campaign with a narrow Coleraine win at the end of last year followed by a 2-2 draw on Tuesday and the 1-1 draw on Friday.

Ironically, either team would have been better losing one and winning one of this week's double-header but that wasn't in anyone's thoughts in front of the BBC cameras.

As a couple of days previously it was Mick McDermott's men who started quickly, forcing their hosts back and taking the game to their opponents.

But Coleraine fought their way back into the game and Matthew Shevlin forced Rory Brown to make a smart save at his near post after a quarter of an hour.

Stephen Lowry must have thought he had come close to opening the scoring after the half hour following good work from Eoin Bradley but his goal bound shot was brilliantly blocked by the diving Patrick McClean.

And they were rocked on their heels when Glentoran opened the scoring just before the break, Robbie McDaid blasting past Marty Gallagher after Ciaran O'Connor was allowed to run unchecked at the Coleraine defence.

Ben Doherty's introduction early in the second half, replacing Evan Tweed, added more pep to the Coleraine attack and he provided the cross for Coleraine's equaliser.

His curling ball from the near touchline led to hesitation in the Glens' backline and Matthew Shevlin pounced, prodding home from a couple of yards out for his third goal in a week against the Glens.

And the same player could have scored again soon after when through on goal but he dragged his effort wide of the far post when well placed.

Both managers emptied their benches in the closing stages in desperate search of a winning goal and Glentoran really should have claimed all three points in the closing moments.

Sub' Dale Gorman drilled a corner into the heart of the Coleraine defence where fellow replacement Ruaidhri Donnelly inexplicably headed over the crossbar from six yards out when unmarked.

In the end, neither side achieved the breakthrough they do desperately sought so it's pretty much as you were between the second and third placed teams in the league.

Elsewhere on Friday, there were convincing wins for Crusaders over Glenavon and Larne over Warrenpoint Town as the chasing pack made inroads at the top.

All eyes on Saturday will be on Linfield's game against Ballymena Utd at the National Stadium at Windsor Park (3pm) and Cliftonville's visit to Portadown in the tea-time kick-off (5.30pm).