Coleraine prove too good for Crusaders 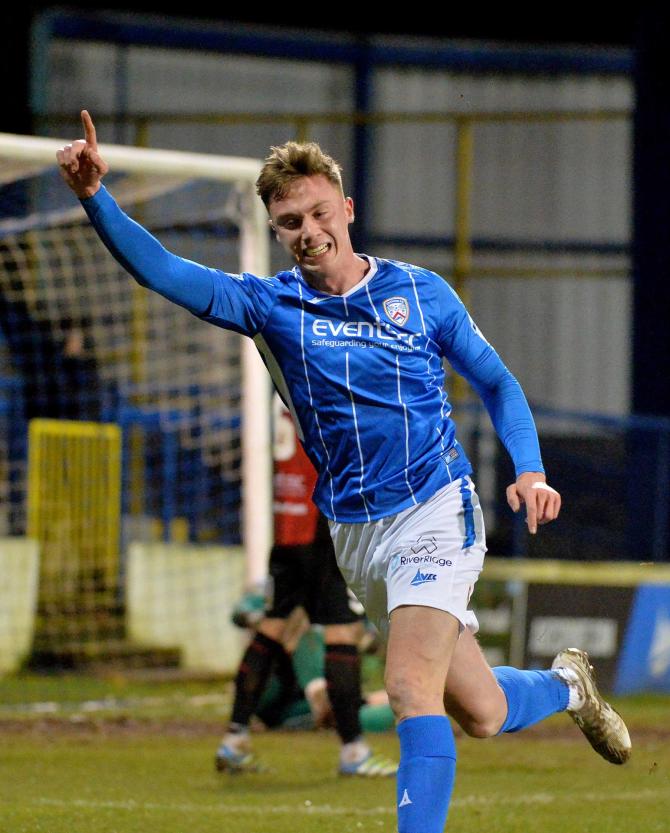 Matthew Shevlin opened the scoring for Coleraine with his first goal for his new club at the end of the first half.

COLERAINE strengthened their grip on second place in the Danske Bank Premiership and opened a seven point gap on third-placed Crusaders with a 2-0 victory over the Crues on Friday night.

A goal in each half from Matthew Shevlin - his first for the club since joining in the transfer window - and Aaron Jarvis after the break was the difference at Ballycastle Road.

To be fair, the margin of victory could have been much greater but for a number of fine saves from Crusaders goalkeeper Jonathan Tuffey, one in particular from Stephen Lowry right out of the top drawer.

It was a deserving victory for Oran Kearney's in-form side who stretch their unbeaten record to 15 games, a run which goes almost three months to defeat at Dungannon.

There was little to write about in the opening 44 minutes - both sides cancelling each other - until Shevlin broke the deadlock with his debut goal.

The imperious Stephen Lowry won the ball on the right wing and lashed over an inviting cross. Shevlin outjumped Robbie Weir at the back post, directing a firm header back in the direction it had come from, giving Tuffey no chance.

It was the goal the game had been crying out for and certainly the tempo increased noticeably after the break.

Former Coleraine striker Jamie McGonigle curled an effort over the bar in the opening minute before the hosts doubled their advantage ten minutes into the second period.

Jamie Glackin's cross from the left was cleared as far as Aaron Jarvis lurking on the edge of the penalty area and his low crisp shot went through a forest of players before ending up in the back of the net.

Crusaders sprang the old guard of Jordan Owens and Paul Heatley from the bench in a bid to rescue something from the game but it was Coleraine who increasingly looked the more likely to score.

Twice, Johnny Tuffey saved his side: first, he palmed away Shevlin's low shot at his near post before he produced an even better save to deny Stephen Lowry in the closing stages.

Crusaders? Well, they didn't muster a shot on target all night. In fact, they had one effort on goal over the 90 plus minutes, McGonigle's effort early in the second half.

Coleraine, in contrast, had four shots on target and four off target. They forced 11 corners over the course of the night as well.

That gives some indication of the gap between the teams on a night when the Bannsiders underlined their title credentials.

They move to within two points of leaders Linfield who play Carrick Rangers on Saturday. Both have played 23 games.

Crusaders are seven points behind in third having played a game more (24).