Warrenpoint next up for buoyant Bannsiders 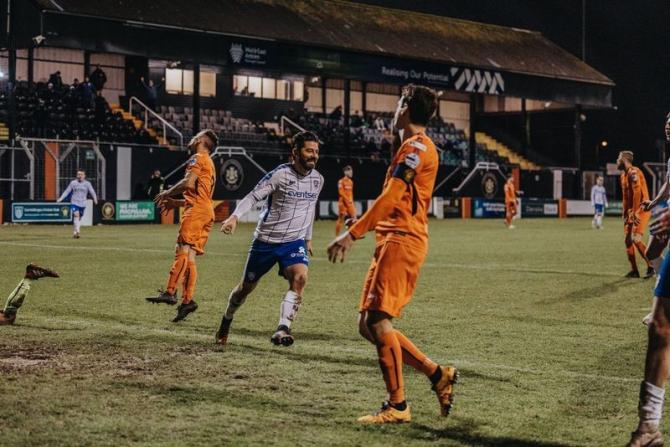 Curtis Allen, hoping to get the nod for Warrenpoint Town after scoring twice in midweek.

THEIR most recent meeting, at the end of last year, is largely credited with being the turning point of Coleraine's season.

Now, Coleraine and Warrenpoint Town meet again at the Showgrounds on Saturday in another important game.

The Bannsiders needed an added time winner from Stewart Nixon to bag the points back in December, a victory which brought to an end a four match losing streak.

It was an important goal then and has become increasingly significant given that the team hasn't lost  since - 11 games unbeaten and counting.

Oran Kearney's men maintained their recent good form with a hard-earned 2-0 win at Carrick Rangers in midweek, Curtis Allen scoring both goals a day after celebrating his 33rd birthday.

The striker has had to be patient for his chance this campaign but admits he understands that squad rotation is more a necessity than a luxury in this strangest of seasons.

That said, he'd be disappointed if he didn't get the nod this weekend.

"At the end of the day, I know I'm not going to play every game and I think everybody in the squad knows bar one or two," said Curtis.

"Yes, I'd love to play every game but maybe at this stage of my career I can't. Oran knows that and I know that.

"Oran is doing a masterclass in utilising the squad - bringing people in and leaving people out - and his man management is brilliant.

"It's a happy camp – there's not one person in there I would say isn't happy even though they're not playing, which is a strange thing.

"For me, it's about coming in and doing all I can when I am playing or coming off the bench.

"I want to contribute as much as I can. I wanna play and I wanna keep scoring goals.

"That's what my whole career has been about so, hopefully, I'll get the nod again on Saturday.

"Warrenpoint are a good side. They've quite a lot of young players – Republic and NI Under-21 players - and you don't know with this league this year.

"You've got to be on it every week no matter who you're playing and the only way you move up in this league is by preparing properly for every game.

"Hopefully we'll do that on Saturday," he added.

Manager Oran Kearney will take stock of his squad before selecting his starting XI.

Marty Gallagher proved a capable replacement in goal for the injured Gareth Deane - who picked up a back injury in the draw at Linfield last Saturday - against Carrick and will no doubt do so again if required.

Club captain Stephen O'Donnell started the game at the Belfast Loughshore Arena but failed to make it to half-time, being replaced by Gareth McConaghie four minutes before half-time.

The big skipper, who has missed a number of games already this season with a troublesome injury, will likely be given time to recuperate and not feature against Warrenpoint.

That means Gareth McConaghie starting alongside Aaron Canning in the centre of defence with Lyndon Kane at right-back and Josh Carson again deputising for Aaron Traynor in the other full-back position.

There could be changes in midfield where Oran has plenty of options. Stephen Lowry almost always starts and could be paired on this occasion with Evan Tweed who sat out the trip to Carrick, being replaced by Aaron Jarvis.

Up front, it would be a surprise if Curtis Allen didn't feature, given his match-winning contribution in midweek, and it could be he's paired with Matthew Shevlin.

The former Ballymena Utd and Linfield striker impressed after coming on for Stewart Nixon on Tuesday and he could get the nod to start.

Or it could be that Oran elects to go with the power of Eoin Bradley who was an unused substitute in the 2-0 win over Niall Currie's Carrick.

Whatever he decides, the Ballymoney man will believe he has enough firepower at his disposal to get the better of Barry Gray's side for a second time, though it won't be easy.

The former Cliftonville boss is a canny operator in the transfer market and has recruited well at the border club - and not just on the pitch.

He has a number of vastly experienced men alongside him on the touchline - including Gavin Dykes and Rodney McAree.

Saturday marks the Dungannon man's first visit back to the Showgrounds since leaving his job as Coleraine manager at the end of the 2019 season.

Previously, on Friday evening, the game of the weekend sees Linfield host Larne at the National Stadium, the two teams above Coleraine in the league table.

Promises to be another significant weekend in the race for the Gibson Cup...