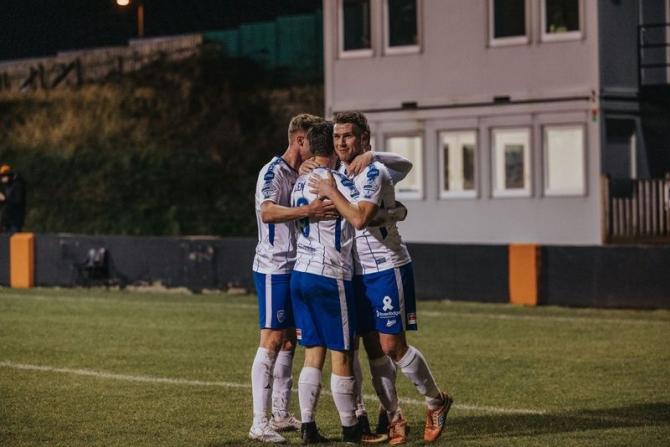 Coleraine players celebrate with Curtis Allen after the striker scored twice in the win over Carrick Rangers.

COLERAINE manager Oran Kearney was full of praise for his players following Tuesday night's 2-0 win away at Carrick Rangers.

And in particular for two men at opposite ends of the pitch - striker Curtis Allen and goalkeeper Marty Gallagher.

Allen scored both goals as Coleraine made it 11 games unbeaten with Gallagher preserving the team's clean sheet with a wonderful double save in the closing moments.

"There's probably no harder place to come on a Tuesday night and prove yourself and we knew how tought it was going to be tonight," admitted Oran.

"But, credit to the lads.

"It wasn't a brilliant first half but the second half we had bit more of a spring in our step.

"It's a big play from Lyndon to get in there and create what would have been a penalty and brilliant sniffing from Curtis.

"As Curtis rightly said a few weeks ago, that's the reason we brought him back to the club.

"His two goals show why we brought him back to the club and he's worth his weight in gold tonight," he added.

"It was nice for Marty to keep the clean sheet and a good save at the end – he deserved that.

"He's been here a year and a half and it's been a frustrating time behind Chris and behind Gareth.

"It's a big test for Marty and that's why we brought him here but he's a huge amount of games behind him already in the Irish League.

"For the nights he's needed, like tonight, it's not a case of you're throwing somebody in that's never played at this level.

"I think he showed every inch of that tonight. He was calm and he did what he had to do."

The duo's performances have strengthened their cases for being included in the line-up for Saturday's game at home to Warrenpoint Town.

But with the games continuing to come thick and fast and every manager utilising their squads there are no guarantees that will be the case.