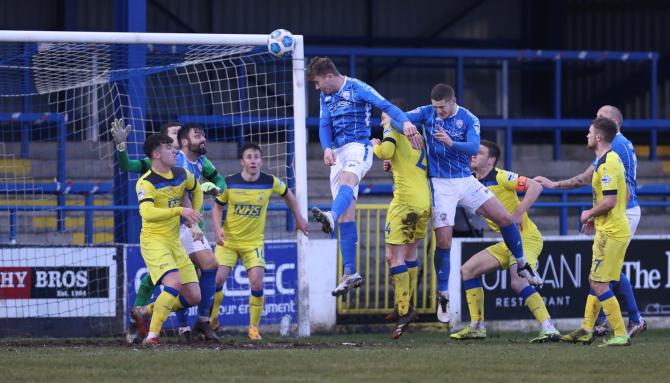 Coleraine made it four wins in a row against Dungannon Swifts on Saturday.

COLERAINE would leapfrog rivals Ballymena Utd into fourth place in the Danske Bank Premiership if they were to defeat Larne at Inver Park on Tuesday night.

Surely motivation if any were needed to get the win over Tiernan Lynch's team.

A draw would see them draw level with the Braid men who enjoy a two goal better goal difference than Oran Kearney's side.

Ballymena Utd's game at Warrenpoint Town is one of two games to have been postponed on Tuesday afternoon, the other Dungannon Swifts's home game against Glenavon.

The remaining three games - Glentoran v Carrick Rangers, Portadown v Crusaders and Cliftonville and Linfield - all go ahead as scheduled.

Coleraine went down 2-0 to this evening's opponents Larne at the end of last year on a day when Davy McDaid dominated.

The striker scored twice and was a constant thorn in the Coleraine defence.

However, the Bannsiders are a much improved outfit that they were then and go into this evening's game on the back of a four game winning run.

With confidence high and a competitive squad at his disposal Oran Kearney and his players will be looking to make it five in a row tonight.