Reds test next for Bannsiders 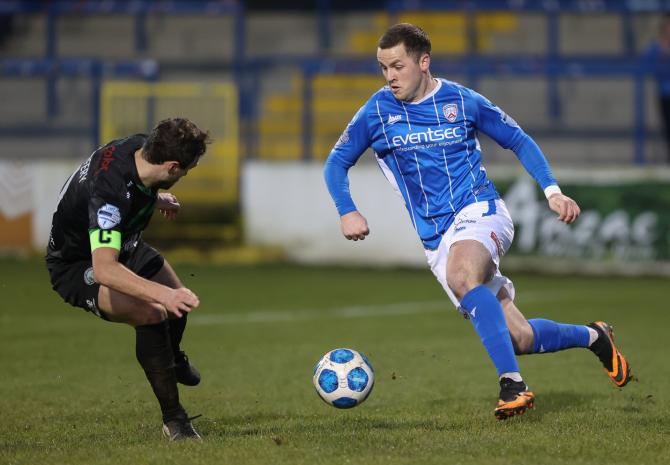 Ben Doherty got back to scoring ways in the win over Warrenpoint Town last weekend.

COLERAINE could join Cliftonville on 13 points in the Danske Bank Premiership, should they get the better of their opponents at Solitude on Saturday evening.

The game, to be streamed live by BBC NI, will be the last competitive game for both clubs for several weeks.

Under terms of the latest lockdown, all football will be suspended until the beginning of January.

That means the high profile Boxing Day derby against Ballymena Utd has been shelved.

But for now, the focus is firmly on Paddy McLaughlin's Reds who drew 1-1 at Glenavon in midweek.

Like tomorrow's opponents, Cliftonville have won just one of their last five games but they boast a formidable home record.

Oran Kearney's men will travel in decent mood, having ended a dismal run with a 2-1 win over Warrenpoint Town last Saturday.

Stewart Nixon was the hero on that occasion with a late winner and he may have done enough to retain his position up front.

“We try to do things as fairly as possible and we've got a good squad and good depth,” said the Bannsiders boss on the competition for places.

“There are players there who have been really patient and training fantastically well and had come to the point where they deserved their chance.

“The Warrenpoint game is one we want to spring out of and really kick on from," he added.

Saturday's game will be streamed live and has a 5.30pm kick-off.

Cliftonville will likely start favourites given their home form to date but Coleraine should have no fears heading to Solitude.

The carrot of joining Cliftonville on 13 points and edging closer to the top teams should be enough to see them produce a winning performance.

Then they can enjoy Christmas with no Boxing Day fixture to fulfill...