Bannsiders look for a change in fortunes 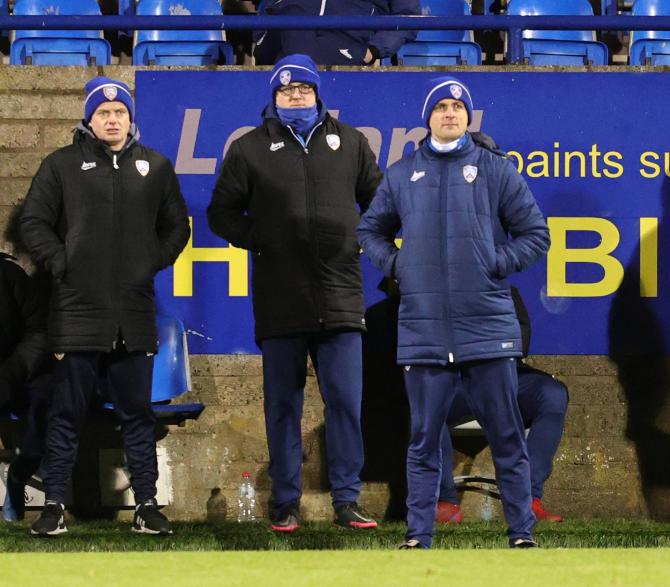 These are trying times for the Coleraine management team.

COLERAINE will look to arrest an alarming slump in form when they host Warrenpoint Town at the Showgrounds on Saturday.

The Bannsiders have lost their last four league games in a row, a scarcely believable return for a group touted as potential title winners before a ball had been kicked.

That lofty reputation was merely enhanced by some headline grabbing performances in the Europa League back in the summer, but defeat to Dungannon a week ago following losses to Larne, Linfield and Crusaders has seen the group crash spectacularly back down to earth.

And they could plummet further still if they fail to get the better of the rejuvenated border club - and Glentoran claim the points in their bottom of the table clash against Carrick Rangers.

That combination of results would leave last year's league runners-up second from bottom and way off the pace in terms of European qualification, never mind a title challenge.

So what has gone wrong?

It's hard to put your finger on any one reason for what we have witnessed in the opening eight games which has yielded two victories, one draw and five defeats.

A European hangover; Covid-19 restrictions; lack of fans; the advantages enjoyed by full-time opposition; injuries; suspensions: all have been suggested as contributory factors and there is merit in making an argument for each one.

But at the end of the day it is down to the players, they are the only ones who can turn the tide. Once they cross the white line there is little management, supporters or directors can do to influence proceedings.

There is no doubting their abilities and you don't become a bad team overnight, but there is also little doubt that confidence is at rock bottom.

The team hasn't scored a goal in the recent four defeats, the joint third-lowest in the league along with, yes, you guessed it - Warrenpoint Town - who come into this weekend's game in fine fettle.

Back to back wins over Linfield - their first ever league success over the Blues - and Carrick Rangers sees them in the top half of the table for a first time in the club's history.

They will make the long journey north feeling they have nothing to lose, knowing that all the pressure will be on their hosts, particularly in front of 500 anxious home supporters.

'Point manager Barry Gray has fashioned a new-look side, one which likes to get the ball down and play through the likes of Kealan Dillon and Ryan Swann, whilst retaining the option of deploying target man Alan O'Sullivan.

The first goal will be key to determining the outcome of this game. Should the home side strike first it may provide the injection of belief the team is so desperately seeking. If they concede, we could be in for a long afternoon.

The last time the Bannsiders scored first in a game, they won, 2-1 over Glentoran at the end of October so it seems obvious that they need to get their noses in front.

Who starts up front in an attempt to gain that advantage is one of a number of selection issues facing Oran Kearney. Does he go with the strength of Eoin Bradley and James McLaughlin as a pairing, or does he opt for a bit more pace and guile with either Jamie Glackin or Stuart Nixon? Or even Curtis Allen?

There are decisions to be made, too, in midfield and perhaps even further back as players return from injury and suspension.

The Ballymoney schoolteacher is enduring his most difficult spell in charge in recent years and he needs to prove that he has learned from what has happened in the previous eight games.

Do that and all is not lost.

A win on Saturday would see Coleraine move on to ten points, three behind current fourth placed team Ballymena Utd but with a game in hand.

At this stage, we'll take what we can.