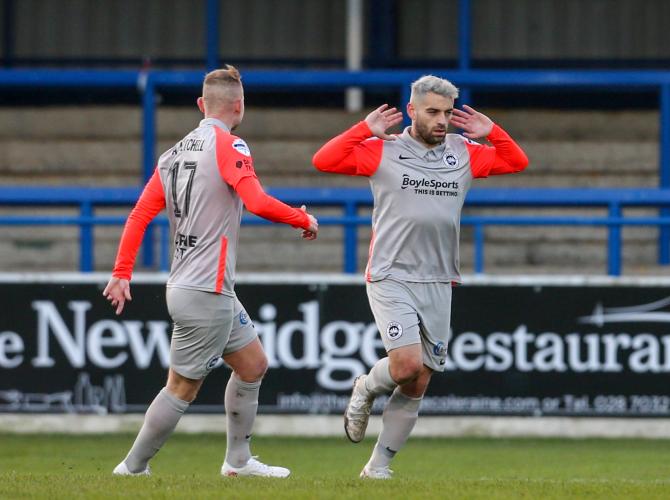 TWO first half goals from an in-form Davy McDaid proved the difference as Larne scored a rare win over Coleraine on Saturday.

McDaid, a one time Bannsider, enjoyed his return to the Ballycastle Road with two fine finishes in the opening 45 minutes.

The first, a rising shot, flew past Coleraine keeper Gareth Deane while the second beat the former Linfield keeper at his near post following some neat build-up play.

Coleraine failed to find a way past Larne keeper Conor Devlin, though that is not to say they didn't have chances of their own.

Aaron Jarvis, Jamie Glackin and second half sub' Eoin Bradley all came close but ultimately Larne held out for the clean sheet and the three points.

The result maintains the Inver Park men's unbeaten start and, on this showing, it's easy to see why they head the table.

Strong in all departments, the benefits of full-time training and everything that goes with that are glaringly obvious.

Coleraine, in contrast, took some time to warm to their task, to get to grips with Tiernan Lynch's men.

When they did, they dominated for periods of the second half and with a little more luck and better finishing could have made the closing stages more interesting than they actually were.

However, it's a third defeat in a row for Oran Kearney's side who find themselves languishing down in eigth place, some 13 points behind the leaders.

They do have a game in hand but it will take all the manager's powers of persuasion and a massive uplift in the players' performances to claw back what is already quite a considerable gap, even at this early stage of the campaign.