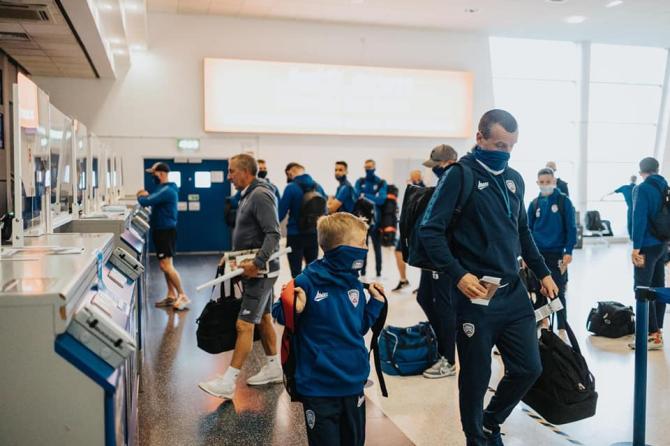 Coleraine players and management check in on their arrival in Slovenia.

COLERAINE players, management and officials have landed safely in Slovenia ahead of Thursday evening's Europa League game against NK Maribor.

They touched down around lunchtime in the Balkan state before transferring to the Maribor City Hotel which will be their base for the next couple of days.

The players will get a run-out at the Ljudski vrt stadium on Wednesday evening, 24 hours before the first qualifying round game on Thursday.

Built in 1952, the stadium has a capacity of 12,702 seats, though on this occasion, of course, there will be no fans present because of the coronavirus pandemic.

The Coleraine squad shows a few changes from that which defeated San Marino opposition, La Fiorita, in the preliminary round.

Veteran defender Steven Douglas and star striker Curtis Allen were both unable to travel because of work commitments.

Their places have been taken by two of the club's promising young talents - Caolan Brennan and Lewis Nevin.

The two teenagers have been handed a place in the squad as reward for their progress in recent months.

"The trip will prove to be a memorable footballing experience for the boys," said Bannsiders' boss Oran Kearney.

"It's a reward for working hard, as well as showing the pathway that exists from the under age squads right through to the first team."