'Skinner' to frame shirt and medal 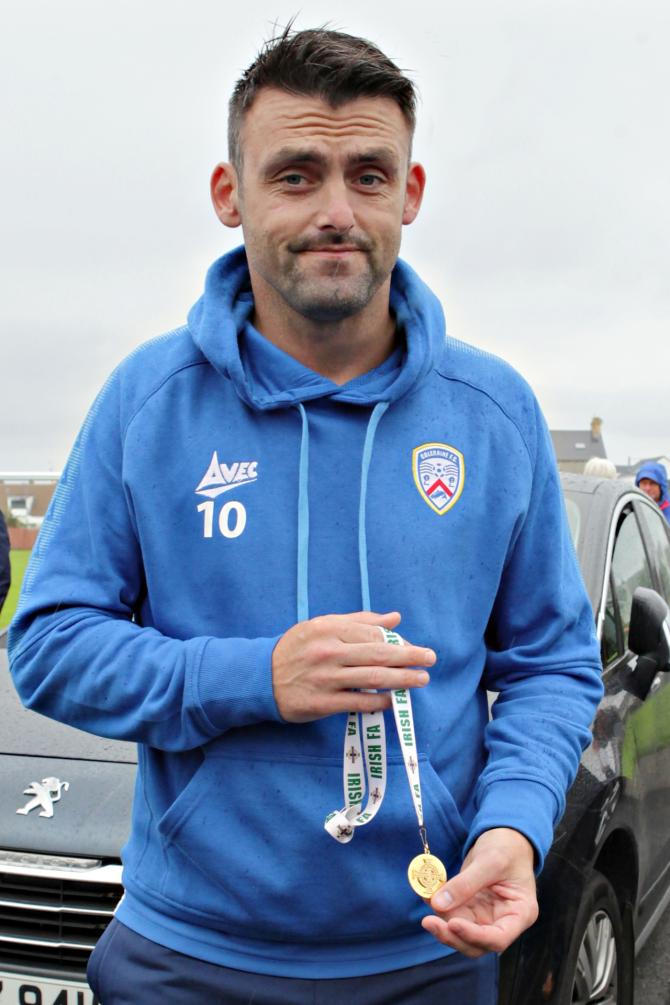 POPULAR Coleraine striker Eoin Bradley plans to make an exception to a rule by framing his 2018 Irish Cup winners medal along with the shirt he wore that day.

Not one given to such excesses, the man universally known as 'Skinner' will do so on this occasion because of the poignancy attached to the medal.

The 36-year-old, scorer of a memorable third goal in the 3-1 cup final win over Cliftonville, presented his medal to James Nesbitt senior immediately following the game after the pair struck up an unlikely friendship.

But on Monday, on the occasion of Mr Nesbitt's funeral at his home in Castlerock, the medal was returned to Bradley by James Nesbitt junior in a touching gesture.

"Yes, it was emotional," admits Skinner.

"I didn't give the medal to him to get it back, but that's what happened.

"James valued it and so will I.

"I don't collect medals but I'll probably put the medal and shirt together in a frame or something," he adds.

Bradley's attentions now turn towards Thursday evening and a Europa League preliminary round meeting with San Marino side La Fiorita.

The Kilrea man admits they know little about their visitors but adds that they have a great chance of progressing.

"We'll probably not have a better chance to be honest," he says.

"The players are determined to get the job done and qualify for a game against Maribor in Slovenia.

"It would be great for us a group and for the club in terms of money."

Manager Oran Kearney has a fit squad to select from, including a number of summer signings.

"There's a lot of competition for places there," continues Eoin.

"The boys that have come in all have a bit of quality and they've all fitted in well.

"But I feel fresh and fit and can't wait for the season, starting on Thursday."