Coleraine pay the penalty for litany of missed chances 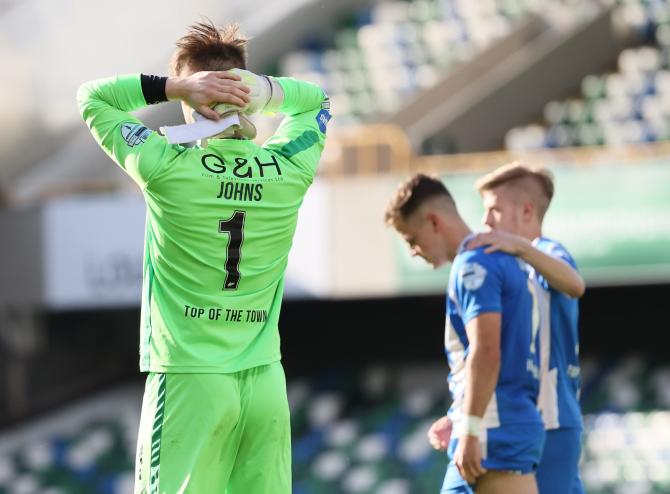 COLERAINE exited the Sadlers Peaky Blinders Irish Cup on Monday afternoon and they've only themselves to blame.

One nil up just before the break thanks to Eoin Bradley's brilliant free-kick the Bannsiders failed to build on this and paid the price when substitute Kenny Kane levelled deep into added time.

And things went from bad to worse in the ensuing penalty shoot-out when Coleraine scored just one of their spot-kicks to crash out in sorry fashion.

David Jeffrey's side will face Glentoran in Friday evening's final after the Glens defeated Cliftonville, again on penalties, in Monday's second semi-final.

It represents a disappointing end to the season for Oran Kearney's men who were on the threshold of a famous treble when football was suspended back in March.

Winners of the League Cup, the Bannsiders trailed league leaders Linfield by four points with seven games left to play and were in the last four of the Irish Cup.

And they seemed on course for another cup final when Bradley curled in a free-kick from the edge of the box in the 44th minute.

The same player went close to repeating the trick in the second period, but this time his effort cannoned to safety off a post.

Coleraine were also denied by the referee's assistants: twice they had the ball in the Ballymena net, only for Stephen O'Donnell and James McLaughlin's efforts to be ruled out for offside.

Ben Doherty also passed up a great chance to make the game safe when he missed the target from close range.

Ballymena threatened little throughout but were thrown a lifeline in the 94th minute when Dervock man Kane scored from close range to level.

Thirty minutes of extra-time failed to produce a winner so it was on to spot-kicks.

Coleraine failed to capitalise on the miss, however, as Stephen Lowry drilled his spot-kick off a post.

Andy McGrory edged Ballymena in front while Bradley screwed his effort wide of the target.

James Knowles doubled up for Ballymena before James McLaughlin scored the first penalty for Coleraine.

Steven McCullough made it three successful penalties for Ballymena and when Ben Doherty blazed his effort high over the crossbar it was all over for the Bann side.

It was a disappointing end to the game - and the season - for Coleraine who must console themselves with European football later this summer.

They will find out their opponents when the draw is made on August 8 with the game due to take place a couple of weeks later on August 22.