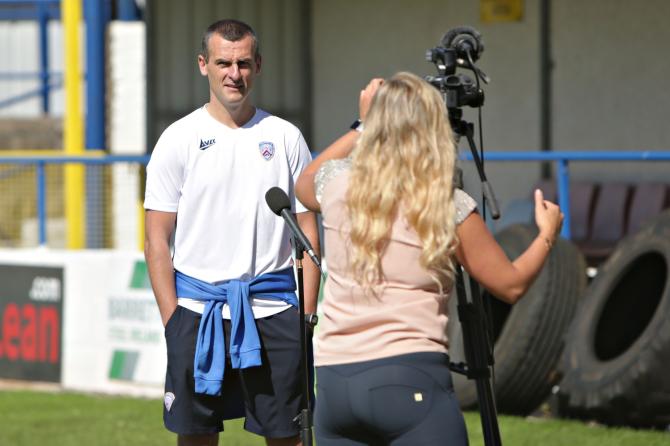 IT may be the strangest season any of us have ever known, but Coleraine manager Oran Kearney is hoping to restore some normality by leading the club to a third Irish Cup final in four years.

Indeed, should he lead the team to success over Ballymena Utd in Monday’s eagerly anticipated semi-final, it would be a third final in as many seasons for the Ballymoney man.

Rodney McAree, of course, was in charge last season when the Bannsiders lost out to eventual winners Crusaders at the semi-final stage.

Coleraine have already tasted cup success this season, back at the turn of the year, when they came from behind to defeat the Crues in the Bet McLean League Cup final.

However, with everything that has gone on since, that seems a very long time ago now.

All football was suspended back in March and Monday’s final will be fully 142 days since any of the four semi-finalists played a competitive game.

Ironically, the final game before coronavirus forced a suspension to the season, saw Coleraine inflict a second defeat of the campaign on David Jeffrey’s side.

The sides drew in the other league encounter, meaning that Ballymena are still looking for a first win over their derby rivals since a 1-0 success back in April 2019.

But that form will arguably count for little at the National Stadium at Windsor Park on Monday afternoon, given the paucity of action in recent months.

“At the best of times, cup competitions are a one-off but particularly this time given that there is no form to speak of,” admitted Oran Kearney.

“To be fair, the whole scenario will be different this time around with no fans in the stadium and all the protocols we have to follow.

“It’s up to us as coaches to make sure the boys are prepared, so that they aren’t shocked with the situation.

“Of course it will be different but it’s the same for the other three teams and we have to make sure we just concentrate on the match,” he added.

The players have been back at training for several weeks and will have played a number of friendlies by the time of kick-off on Monday.

“There’s a huge amount of dialogue there with the players to ensure that everyone works at the right pace for them,” continued the Ballymoney schoolteacher.

“We’re trying to manage the group individually and collectively as best we can.

“At the end of the day, Monday gives us the chance of another final and potentially another medal.

“This competition is completely legitimate: there’s no asterik beside it and the challenge is there.”

A win on Monday would see Coleraine advance to a final meeting with either Cliftonville or Glentoran who meet in the second semi-final and the chance of adding to their silverware of recent seasons.

It would also provide welcome additional competitive action ahead of the club’s return to Europe next month.

The draw for the qualifying round of the Europa League takes place on August 8 with the game to be placed on August 20.