Over 2m Euros set aside for clubs 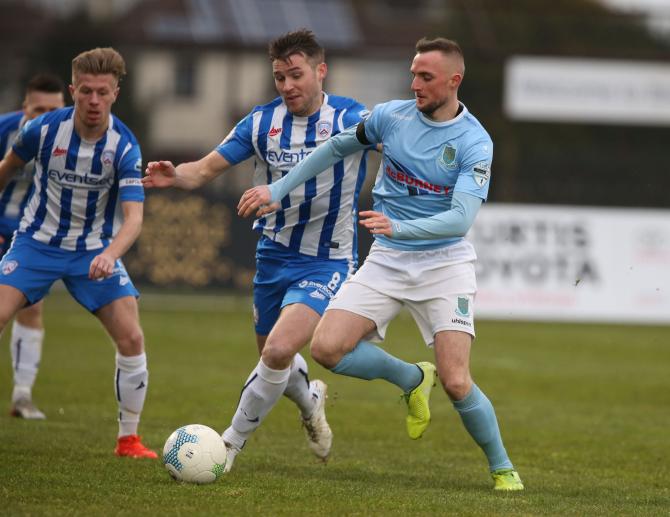 Coleraine were last in action at Ballymena in mid March.

PREMIER Division clubs in the League of Ireland could receive 191,000 Euros each from the FAI as part of a compensation package to help restart the 2020 campaign.

The news comes amid ongoing discussions between clubs here to determine a satisfactory conclusion to the Irish League season.

The latest in a series of meetings was held on Thursday evening when a new proposal, put forward by  Crusaders, recommended bringing an end to the Danske Bank Premiership now.

The north Belfast club suggested that the current top two clubs in the league - Linfield and Coleraine - should be nominated for the Champions League and Europa League respectively.

They also recommended sharing the European money - money which will normally be split between the three clubs competing in European competition - among clubs throughout the top three divisions.

Representatives of the Danske Bank Premiership clubs are expected to hold further talks over the weekend before meeting with NIFL officials on Monday.

However, the revelation that clubs down south are set to receive considerable sums from their governing body is sure to cause disquiet on this side of the border.

Especially since the IFA appears reluctant to distribute UEFA Hat Trick programme funds - part of £200m released by UEFA earlier this year 'to help member associations meet the challenges of Covid-19 in their respective countries.'

The IFA has distributed £16,000 to each Irish League club amid the coronavirus crisis, but there have been calls for the sport's governing body to share more of the almost £4m it received from UEFA.

The news emerging from the Republic will only serve to increase that sense of frustration, with reports suggesting as much as 2.15m Euros will be distributed among League of Ireland clubs.

First Division clubs, meanwhile, who released a joint statement of support following last week’s meetings, will be paid an average of €68,000.

Overall, the FAI have illustrated how they intend funding the €3.3m cost associated with getting the professional game back up and running after it was halted in mid-March.

The costs, on top of the payout to clubs, are itemised into stadium grants, streaming costs, FAI Cup, marketing of streaming, and referees’ fees according to a report in the Irish Examiner.

Which begs the question: why is the burden of bailing out the game at the top level here fall on the member clubs who are being asked to share hard-won European prize money?

Given the amount of money reportedly received by the IFA from UEFA, and following the example of their contemporaries in the Republic, should they not dig that little bit deeper?