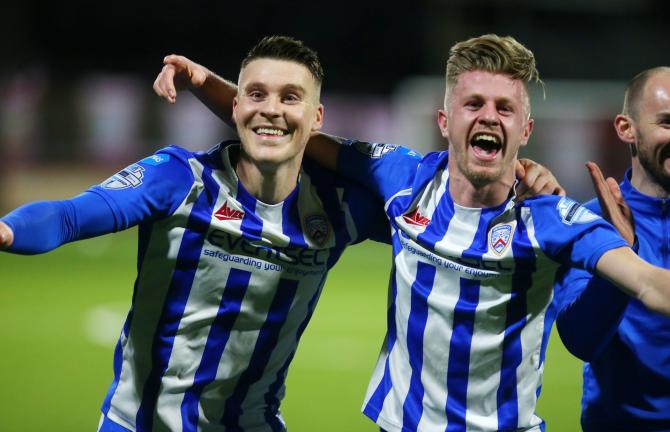 Delighted to be in the last four of the Sadlers Peaky Blinders Irish Cup.

DECISIONS, decisions, decisions - that's what's facing the powers that be ahead of this month's Sadlers Peaky Blinders Irish Cup semi-finals.

Where to play the games?

Which one to stage on the Friday?

And which on the Saturday?

As yet, there has been no indication as to the thinking of the authorities, leaving supporters of the four clubs involved to offer their suggestions.

A number of options have been discussed.

For my part, I would prefer that both semi-finals are staged at the National Stadium at Windsor Park.

But I am led to believe that this may not be possible, given the national team's commitments at the end of March.

Which is a shame, as Windsor offers the best facilities of any ground in the province.

The fact that Coleraine enjoy playing there is a bonus, of course.

The Oval, home of Linfield's Belfast rivals Glentoran, is being mooted as the most likely venue given the unavailability of the south Belfast venue.

Which is a shame, as the Oval offers arguably the worst facilities of any ground in the province.

Down at heel, the east Belfast venue isn't much loved by supporters of visiting teams, difficult as it is to generate an atmosphere.

So, if we rule out the 'Big Two' grounds, what else is available?

What about Seaview, home of Irish Cup holders Crusaders? The Shore Road ground is a compact stadium which has benefited from investment in recent years.

Would it be large enough, though, to house a mouth-watering Irish Cup semi-final between Coleraine and Ballymena Utd, a fixture sure to attract a huge crowd.

It wouldn't be ideal from a travelling point of view, but Mourneview Park in Lurgan is another possibility for the derby duel. It would have the capacity and help generate an atmosphere fitting of such a big game.

Or what about Larne's Inver Park as an outside bet?

Failing that, simply toss for home venue and let both teams go for it.

Whatever decision is reached, the most important thing is what happens on the pitch.

In that regard, I believe we have grounds for optimism.

* What do you think? Where do you think the semi-finals will be played? And where would you like to see them staged?