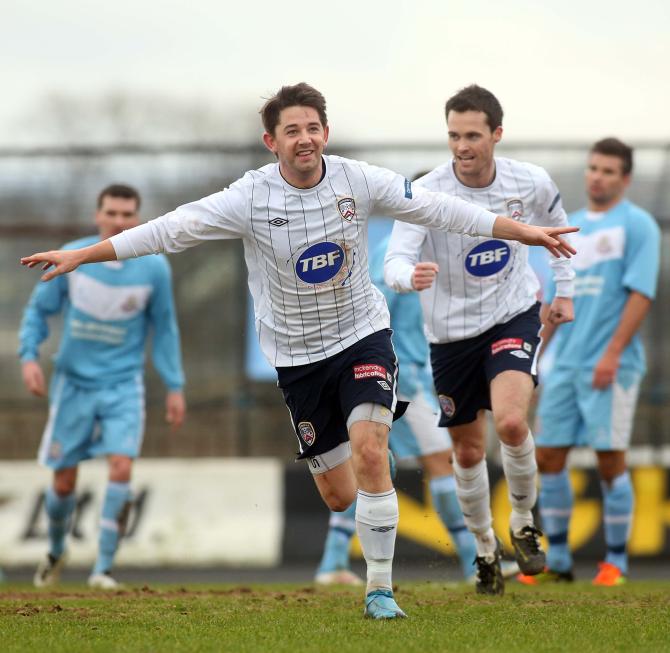 Curtis Allen, on his way back to Coleraine.

COLERAINE have moved to strengthen their attacking options on a busy final day of the January transfer window.

Carrick Rangers forward Stewart Nixon signed a three and a half year with the club around 8.30pm on Friday night.

Just hours later, it was confirmed that former Glentoran striker Curtis Allen was rejoining the club.

The 30-year-old arrives on loan to the end of the current season, with the option of an extension come the summer.

The double swoop represents good business for the Bannsiders who are challenging for honours on three fronts.

They are currently involved in a five-way battle for the Gibson Cup, face Crusaders in the final of the Bet McLean League Cup on February 15 and have ambitions of enjoying a lengthy run in the Sadlers Peaky Blinders Irish Cup.

Manager Oran Kearney said he was delighted to get the deals over the line.

"Stewart is a player we have been tracking for some time," he said.

"He has served his apprenticeship with Carrick Rangers and comes to us at a good age.

"He offers us something different up front and hopefully he can become an important player for us," he added.

Nixon, 22, admitted the lure of playing under Oran Kearney at a club challenging for trophies was the key factor in him making the switch from the Belfast Loughshore Arena.

"There were other clubs interested but once I knew Coleraine were in for me that was it," he said.

"Oran's the best manager in the league in my opinion and I am delighted with the move.

"It was hard leaving Carrick as I had a great relationship with the manager there and all the players but I feel the time's right for a new challenge," he added.

A graduate of Northern Regional College in Coleraine, where he was part of a trophy winning team, Nixon is cup-tied in both the League Cup and Irish Cup, having played for Carrick in earlier rounds of the tournaments.

No such worries, though, for Allen who will be available for selection in both competitions, having missed a large chunk of the season through injury.

He made his comeback appearance for the Glens as a sub' in the recent 4-0 win over Glenavon, his last game for the club.

The Belfast man, who scored 110 goals in 232 games at the Oval, said he was 'buzzing' about returning to The Showgrounds where was he was a firm fans' favourite in his first spell between 2011 and 2013.

Interestingly, Coleraine's next league game is away at Glentoran on Saturday February 8.

One departure from Coleraine sees exciting young talent Alexander Gawne, who came off the bench to score the winner against Cliftonville in Coleraine's last league outing, go out on loan to Carrick Rangers for the remainder of the season.

Oran Kearney hopes the move will see the teenager enjoy more game time as he continues his football development.

For all the latest news and reaction to what is a busy week in local football, check out Tuesday's Chronicle.