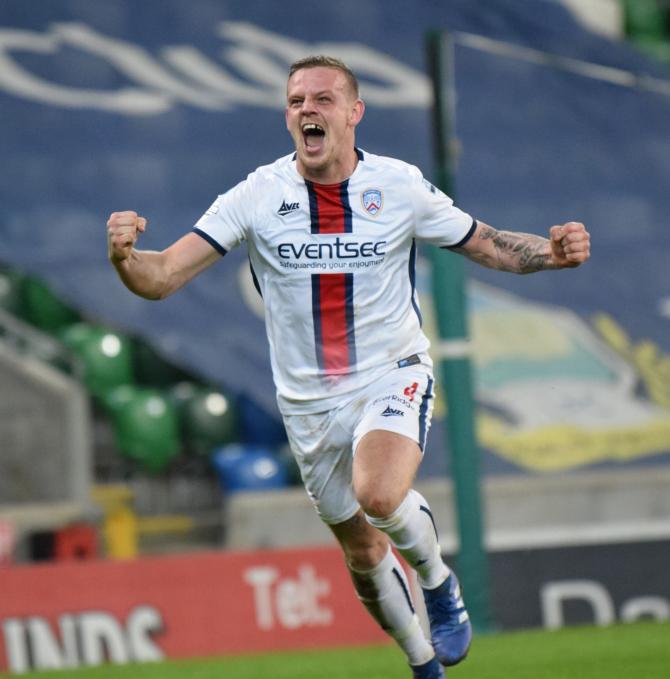 COLERAINE will face Crusaders in the final of the Bet McLean League Cup in the New Year after defeating Linfield in Tuesday's semi-final in what manager Oran Kearney hailed as the 'complete performance.'

Second half goals from Aaron Canning, Ben Doherty and Aaron Jarvis sealed a merited 3-0 win over the Blues whose boss, David Healy, admitted his players were 'miles off.'

The sides remained deadlocked at 0-0 at half-time following a cagey opening 45 minutes but the visitors seized the initiative on the restart and ultimately ran out comfortable winners.

Defender Aaron Canning rose superbly to head the Bannsiders in front just after the hour mark after Linfield failed to deal with a Ben Doherty free-kick and they continued to look the more threatening.

Healy rang the changes in an effort to break down a resolute Coleraine rearguard, introducing Jordan Stewart, Andy Waterworth and Bastien Hery off the bench, but to little effect.

Coleraine doubled their advantage ten minutes from time when Ben Doherty's cross took a wicked deflection on its way into Rohan Ferguson's goal.

And when midfielder Aaron Jarvis nodded home the third minutes later it was game up for the holders who will be disappointed at the manner of this loss and the defence of their title.

In contrast, Coleraine players and management celebrated on the pitch in front of their exhuberant fans in the North Stand long after the final whistle, revelling in a third win over Linfield this season.

"The support was brilliant as it has been all season long," admitted Oran.

"A cup final is a cup final and we know from the Irish Cup final a few years ago what it does for the borough and the north west.

"There will be a great buzz around the place for the next couple of months for everybody and it gives us all something to look forward to.

Crusaders, meanwhile, defeated Institute in the other semi-final at Seaview thanks to goals from David Cushley and Jordan Forsythe.

The final is scheduled for Saturday February 15 and a is a repeat of the 2012 decider played at the Ballymena Showgrounds, which the Crues won 1-0 thanks to a Chris Morrow goal.

It is not known at this stage where the final will be played, with both Windsor Park and Ballymena Showgrounds under consideration.