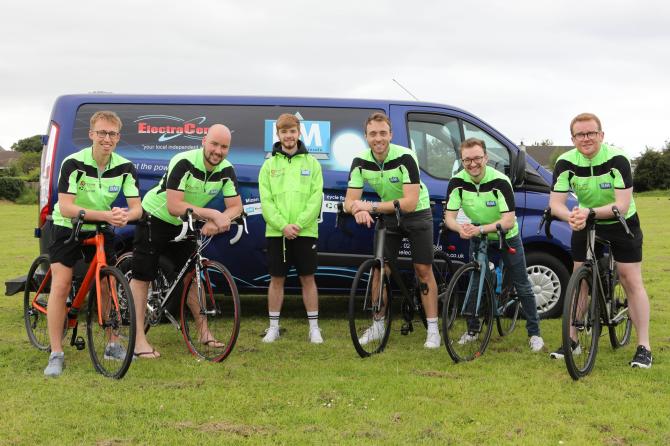 Conor Mullan, Johnny McBride, Tom Robinson, Andrew McClelland, Stephen Ramsey, and Declan Shiels at the start of their cycle ride the length of Ireland in aid of Air Ambulance. WK27-46TMSP

Six friends are currently embarking on a mammoth challenge of cycling from Mizen Head in Cork to Malin Head in Donegal in just seven days.

Conor Mullan, Andy McClelland, Declan Shiels, Stephen Ramsay, Jonny McBride and Peter McNally, who have named themselves as 'The North Coasters' got their challenge underway on Monday (July 4) to raise funds for the NI Air Ambulance.

The idea for the trip stemmed from a light hearted message in a WhatsApp group that was taken more seriously than originally anticipated as the majority of those involved didn't own a bike until last year.

The group set monthly training targets over the last six months to stay on track, with the KM's gradually ramping up to 700km, which was always kept interesting by the unreliable local weather.

Unfortunately, the group set off missing one, as Peter McNally contracted Covid, but he still has high hopes of joining at the halfway point through Westport.

Title Sponsor for the challenge is BM Electrical and they have played a fundamental role in making the lads' journey possible, as not only have they supplied a support van and driver (Tom Robinson, logistics manager), they have also sponsored and supplied jerseys and jackets.

Conor Mullan of the group said:

"My message to everyone supporting us: A simple and humble thank you!

"We are delighted to have raised this much so far. The training has been long but I cannot think of a more worthy cause.

"Your generosity in these of all times is phenomenal."