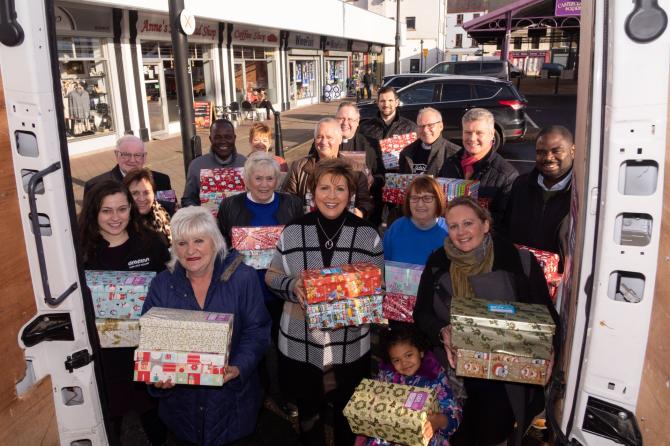 Loading up this years donation of Shoe Boxes of gifts for children in deprived areas of the world at Drop Inn Ministries in Ballymoney last Wednesday. WK47-004-CR-BM

This annual send off is the culmination of weeks of effort by a team of dedicated volunteers with many individuals, churches and schools also pitching in.

Pastor Ronnie Dawson, Director of Drop Inn Ministries would like to thank the people of Ballymoney and surrounding districts for their great generosity in response to this year's Christmas Shoe Box appeal.

"I would also like to thank all the local schools and churches who helped with the appeal," he said.

"A number of dedicated women knitted things for the shoe boxes.

"Two women in particular knitted over a hundred pencil cases and then put a pen, pencil, rubber and sharpener in each one, all the things a child would need.

"Another lady knitted 80 sets of gloves, hats and scarves and has already some done for next year.

"Ellen Thompson covered 538 boxes and bought the wrapping paper and sellotape herself.

"We would give a special thanks to these ladies for their dedication and hard work and to everyone who helped in any way."

Pastor Dawson would also thank Pastor Yvonne Payne for praying over the boxes and for a safe journey for the lorry drivers.

Also the Mayor of Causeway Coast and Glens Borough Council, Sean Bateson for holding a reception in the Mayor's Parlour for the Shoe Box Appeal team.

Three apologies were received from people who were unable to attend the van send off.

Pastor Dawson concluded by saying that Shoe Boxes are still coming in; they can be brought in until the end of November and can be taken up to the departure depot in a smaller vehicle.