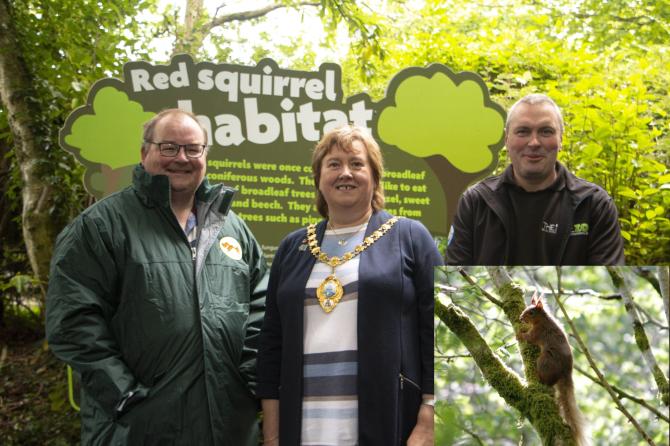 BELFAST Zoo born red squirrels are off to a Mid & East Antrim coastal country park; Carnfunnock Country Park is to become a haven for red squirrels as the furry friends are reintroduced from Belfast Zoo in a bid to boost local population numbers.

Despite being present in Ireland for more than 10,000 years, red squirrels have declined dramatically due to loss of habitat and diseases spread by the invasive grey squirrel.

A local environmental group alongside Mid and East Antrim Borough Council, and Cairndhu Golf Club are hoping to change this by reintroducing the animals with a special immersive, woodland enclosure at Carnfunnock Country Park on the famous Antrim Coast.

Ballygally Biodiversity Group have been working tirelessly for the past four years to not only raise awareness around the issues facing reds, but to get involved in this special breeding programme by Belfast Zoo and to secure this stunning location for the release.

Raymond Robinson, Curator, Belfast Zoo said ‘It is fantastic to see that our red squirrel release programme is making positive changes across Northern Ireland. We are hoping for great success with the release, hopefully Carnfunnock Country Park will have some red squirrel kittens soon!’ He added, ‘We are hopeful that our continued red squirrel releases across Northern Ireland will encourage native breeding and a surge in the reds population. This is our fifth red squirrel site release to date and we are hoping for more native breeding success and repopulation efforts in the future.’

Joe Dowdall from the group hopes this project will bring a resurgence of reds back to this part of County Antrim: “We are delighted to release these animals here at Carnfunnock Country Park. People have fond memories of walking through this same woodland as kids and enjoying watching red squirrels, and hopefully now the future generations to come can also experience this as the population reinstates itself here. We have already seen success in Glenarm where the first pilot scheme was introduced and this is just another step forward in our mission to ensure the conservation of this beautiful, native species.

“Many people are familiar with the red squirrel’s bright red coat and bushy tail but aren’t aware of the severe threat they are under from greys across Northern Ireland. We want to educate people that greys are pests and are spreading lethal viruses to the native reds, wiping them out. We hope by releasing these creatures into the wonderful woodland here, not only will the population grow but we can continue to raise awareness of the issues facing reds with walks, talks and trails.

“We’d like to thank the council and staff at Carnfunnock, Cairndhu Golf Club, Belfast Zoo and Ulster Wildlife for supporting this project and we are very excited to see what the future holds for these amazing creatures here in Mid and East Antrim.”

Mid and East Antrim Borough Council have a series of events planned to celebrate the release and will be installing new interactive experiences in the park.

Mayor of Mid and East Antrim Borough Council, Cllr Maureen Morrow said: “We are proud to be involved in such an important and valuable scheme. Thanks to the hard work of Ballygally Biodiversity Group and their partners we can now witness the return of the reds back to Carnfunnock Country Park and settle in their new safe and secure home.

“In addition to this amazing work, Mid and East Antrim Borough Council will continue to improve the habitat at Carnfunnock and Chaines Wood ensuring the long term sustainability of this red squirrel population through tree planting and management of the site.

“Projects like these are vital to raising awareness of the environment around us, and the dangers that face it. We can all play our part in protecting where we live and council hopes that by bringing the reds back to the area, not only will we see a benefit to the animals themselves, but the biodiversity of the area by boosting eco-tourism here in the borough, and NI as a whole.”

It is hoped within two years, Carnfunnock Country Park will become an established and sustainable site for red squirrels.